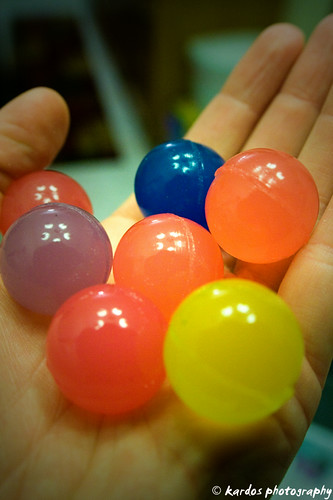 Somehow, this day has been the closest I’ve felt to normal in at least a week. But it’s also been really WEIRD.

While at work today, where I managed to be for a respectable number of hours for the first time this week, I received this IM.

Lucas: hmmm
you may want to be around somewhere when I get out of work
me: ok
why’s that?
Lucas: because I may well be your hero at approximately that time
so you’ll want to be involved
me: hmm
how do you plan on being my hero?
Lucas: what fun would it be to tell you now?
me: not cool
Lucas: fine then
i can find something to do with a gross of bouncy balls without you

Long story short, I had told Lucas a few days earlier about how in junior year of college, my boyfriend and his roommates bought a gross of bouncy balls, and unleashed them on unsuspecting party-goers from the top of the spiral staircase in their apartment. Mass amusement ensued.

And I mean, really, who doesn’t enjoy having 144 bouncy balls lying around? So post-work, I headed over to his place, where we proceeded to fling bouncy balls at each other for AT LEAST 30 minutes. I’m guessing they’ll be finding bouncy balls in that apartment up until the day they move out. “It’s kinda like Easter eggs!”

Then I grabbed some pizza at Sicilian Thing on my way to D’s for movie night, noting that there was a hooker out on 30th and El Cajon already (it was only about 8PM at this point). We watched Shoot ‘Em Up, which was fantastic in a terrible/awesome sort of way. I got yelled at for almost falling asleep about a million times – keep in mind this says nothing about the movie, I just think I have movie-induced narcolepsy. D’s actually taken to yelling “Hey!” at me when he sees me nodding off, which makes me jump about a foot in the air. And stay awake for maybe 10 more minutes.

After the movie, I headed home down 32nd Street. While approaching the light at El Cajon, an SUV going the opposite direction cuts me off to park haphazardly in the driveway of an apartment building. I was a bit peeved. And then I saw a hooker, no wait, the same hooker I saw 2.5 hours earlier on the way to get pizza, running towards the vehicle. And I just had to laugh.

I love this neighborhood. I really do. And I love that my life is so freaking random that there is room for bouncy balls fights. Because really, the only thing I’m looking for out of life is something like this:

with the door closed
welcome to the thunderdome coltrane
me: OMG
I WANT TO GO TO THERE
Posted in 365 days 365 photos