Thanks to Rosey for pointing out that this year is a leap year, thus there are 366 days in it – I amended the title of this section to reflect that.

For today’s photo, I decided to head over to Scripps Pier, a place I used to go to a lot when I lived in the UTC area, but that I haven’t been to in awhile. Quite frankly, it’s been awhile since I’ve been to the ocean at all. Kinda strange. Anyway, I took the tripod, of course. The first shot I took was just a 30 second exposure at ISO 100 to gauge the available light. Then I guessed that a five minute exposure would probably be about right. And five minutes later, I had this photo: 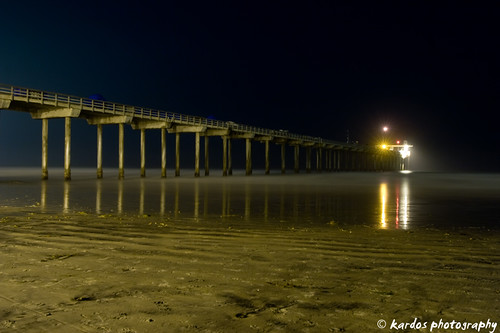 Sometimes, things just work out nicely for you. Which was good, because I was starving and had to make my way up to Solana Beach for the Midwinters show…expect a review of that (and the two other shows I attended this week) probably tomorrow.