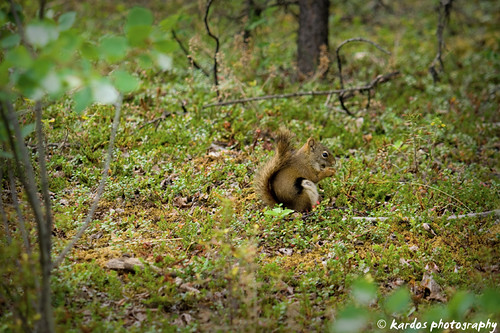 I dunno. It’s a squirrel. I think I only picked this one so I could tell this story.

I went to Penn State for undergrad, and stayed up in State College every summer because I had a job in a lab that was interesting, paid well, and allowed me to make my own hours, so long as I worked 40 of them in a week.

So the summer after my sophomore year, I used to work 3 twelve-hour days and one four-hour day so that on Thursday afternoon I could head down to the Jersey shore, where my boyfriend’s family had rented a house for the summer.

One morning, I was heading into work around 8AM. At 8AM in the summer, that town is dead. As I was walking past this huge lawn in front of the student union, I noticed a ton of squirrels hopping around and chasing each other all over the place.

I was walking through their playing field, apparently. And they didn’t like it one bit.

As I walked up the path, they all stopped what they were doing. And stared at me. And they all started to make this strange clicking/coughing noise.

By squirrels. I know, right? But I honestly was worried they were going to attack me en masse or something.

Obviously I got up the path without anything happening (because, you know, they were squirrels, after all), but to this day I’m convinced that squirrels are going to take over the world someday.