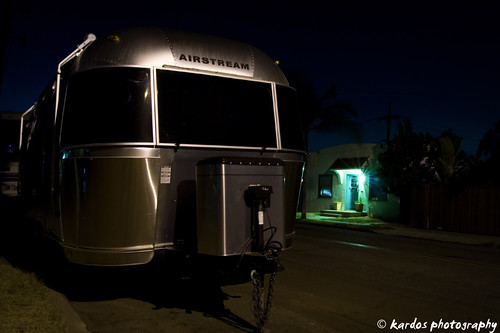 This thing has been parked sort of near my apartment for the last, I dunno – week? Two weeks? I seldom drive that way, but every time I have recently, it’s been there.

It’s pretty awesome. So I decided to take a photo.

The funny thing is, this was supposed to be an exercise in off-camera flash. Nothing fancy, just manually setting the flash and firing it off a few times during a long-ish exposure.

Figures I like the test shot taken without any flash more…

Really, it’s just because of a technicality. This beautiful Airstream trailer is made of shiny metal. That’s kind of what I love about it. But as we all know, metal is incredibly reflective. So flash = streaks. Annoying streaks. That I couldn’t ignore, even though I liked how the flash made the trailer stand out a bit more from the background. Argh.

Someday I’ll learn how to do things properly. Until then, I’ll just keep screwing around (literally) in the dark. It’s kind of fun.