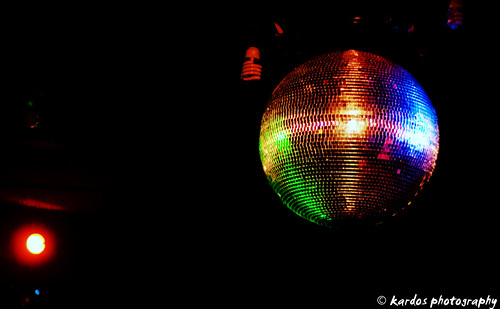 Sunday night I went to check out O’Death at the Casbah. I took some photos, but they all turned out like crap because the lights were extremely low and, to be honest, I wasn’t feeling motivated enough to break out the flash.

I felt all sorts of discombobulated that night. This disco ball was hanging over the middle of the dance floor, which was confusing to both me and Rosey (“That’s not usually there, right?” said the girl who spends more time at the Casbah than anyone else I know).

The second band started off with a weird funky song that sounded straight out of a blaxploitation film. And then switched to country. WEIRD. And then there were their friends, or fans, or…something. Can I just note that you might want to avoid that first booth in the back bar for a little while? And also the spot right in front of the merch booth? And also the dance floor? And everywhere?

Despite being sober and wanting to kill people because of it, when O’Death started playing, all that sort of melted away. They sounded really great, which was why it was such a shame when matters of…ummm…hygiene (and shirtlessness) made it necessary to retreat to the smoking patio to watch the rest of the show. Which was alright with me, as Rosey was stuck at the merch table and seemed to enjoy the company.