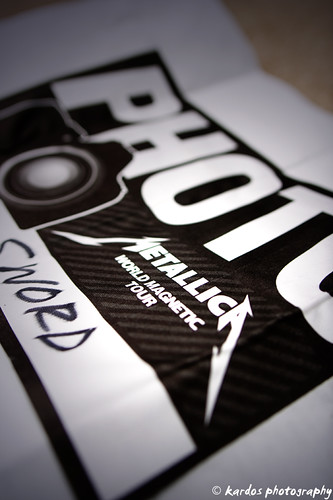 Why is it that the larger a venue is, the more incompetent their staff is?

This is a photo pass that was never used, that was accompanied by a ticket that never even got scanned. Why? Because of events that were about 10% my fault, 90% the venue’s fault.

My mistake was assuming that if Cox Arena’s website said doors at 7PM, then The Sword (1st opener) wouldn’t play until 7:30 at the earliest. You know, so they didn’t start out playing to a mostly empty arena.

So I left work at 6:45PM and headed straight to SDSU. There was some traffic, so as D did some careful maneuvering, I texted my contact for The Sword to see what time they were supposed to start playing. This was about 7:10PM.

He replied saying that they were already onstage. Basically, I blew my chance to shoot them. Awesome.

Figured we’d still go and get to see some of Metallica, maybe even get to shoot them and the other opener, Lamb of God. I was in it mostly for the photo aspect anyway.

D dropped me off at the box office and went to find parking. I made it up to the ticket window a little after 7:30, and after checking my printed-out email confirmation from The Sword’s PR people, the woman went off in search of my tickets and photo pass. And you know what? All those times I stood waiting for photo passes to be found at House of Blues, all while the people behind me were getting annoyed – well, that was nothing compared to the time I spent waiting for this woman to find my tickets. D found parking and had already walked most of the way to the arena by that point.

And then I looked at the tickets. Not even in the same section. Awesome.

We made it all the way through the security line before the last woman we had to go through saw my photo pass, didn’t know if it meant I could bring a camera in, and so called her supervisor over. He stood there telling me, “You have to go through the fast entrance. I don’t know what that pass means.” Me: “Well, it says photo on it, and Metallica, and we already made it through security, so…” He insisted on escorting us to the handicapped entrance, which did not say “Press” anywhere on it.

Got through security again. Inside the gate there was a little holding tent with a few employees milling around. One of them told me that I had to hang out there and wait for someone to come by and escort me into the photo pit. And oh, by the way, they had absolutely no way to get in touch with her. Helpful, eh?

I asked if I could go inside to see the show, which was now on the second band. At 8PM. They told me I couldn’t actually take my camera inside the venue. And I couldn’t leave it with them. Instead, I would have to leave the venue, walk across the way to another building and leave it in a classroom? No way.

I told D he didn’t have to wait with me, he could go in and watch the show since our tickets weren’t even together anyway. So he popped in for about 2 minutes to see some of Lamb of God, which he described as “super death metal.” Then he got bored so he came back to keep me company while I waited. And waited. And gradually grew amused at the number of people who were coming in with ticket scan issues and being routed to the interior box office to fix the issue. Also, all the re-entry that was being allowed, even though the venue has a strict no-reentry policy. Basically, no one knew what was going on or how to do their job.

After standing there for at least a half an hour (at least we were covered so we weren’t getting rained on, and at least we both had hoodies), the escort to the photo pit came by. She told me I wasn’t on the list for Metallica, and asked who had approved my pass. I told her it was The Sword’s PR people, and she asked “Oh, so you’re going to be shooting The Sword?” Me: “Ummm, I would be if they hadn’t already played.” After witnessing her confusion for a few minutes, I gave up.

I bailed. I had no desire to see Metallica at that point (if I ever did in the first place), and even less desire to leave my camera in some classroom and go through past security again. And since we hadn’t had time to stop for food beforehand, D and I were both starving.

So we waved goodbye to that clusterfuck of an evening and headed to Sicilian Thing – the only saving grace of the night. Well, that, and some goofy songs on the radio that we ended up singing at the tops of our lungs.

Moral of the story: Fuck you, Cox Arena. I will never attempt to shoot a show there again. And it would have to be someone pretty special playing there for me to even consider going to a show there.

Also, might have to institute a new rule of only shooting bands that I really like or that I’m getting paid to shoot. My day job is stressful enough without having to put up with the bullshit that venues and bands place on photographers, unless I’m ultimately getting something out of it in the end. Seriously, last night was such a waste of time that at one point I turned to D and honestly said, “Man, I could have been doing laundry tonight.” And I HATE doing laundry.