A Soundtrack to Science

Yesterday, I spent two and a half hours in the tissue culture room, isolating mouse embryonic fibroblasts and taking care of other cells that I already had growing. I usually don’t listen to much music at work unless I’m in the process of writing a grant or a paper, but when I know I’m going to be in a windowless room for that long with my gloved hands stuck inside a sterile hood, I usually just put my iPod on random shuffle.

Given that it’s a 160GB iPod, there’s A LOT of music on it, so it’s always interesting to see what comes up. And here’s the playlist from yesterday: 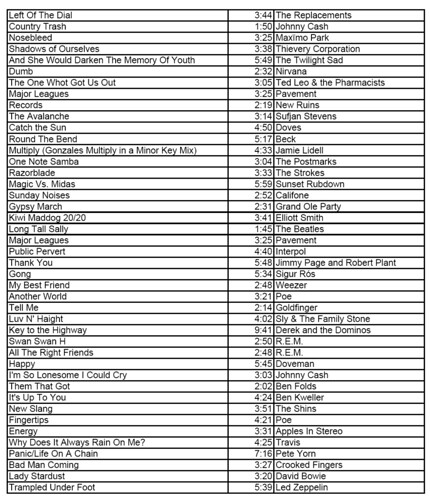 I was pretty happy with the mix, although the back-to-back R.E.M. songs was a little weird. It was also somewhat strange that, not only did it play two Pavement songs, but it played the SAME ONE twice – although, to be fair, that song came once from Terror Twilight and once from a mix CD that I made for a friend entitled Songs to Listen to While Looking for Parking in Manayunk and Dreaming of Pizza from Santucci’s. Yes, I still make mix CDs. And yes, there is a story behind that title.

Also, two Johnny Cash songs – not bad at all. And I was super pleased with the back-to-back Ben Folds and Ben Kweller, even though they were both live versions.

I’m considering making this into a Muxtape, but before I go though all the trouble, is anyone out there really interested in streaming it? If so, I might feel compelled to make this a semi-regular feature.