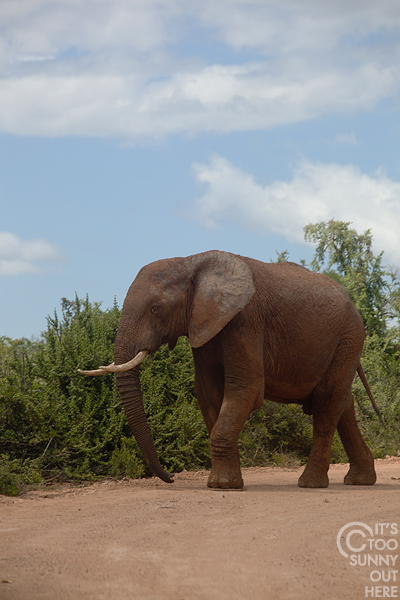 I was visiting Andrew this past weekend when he gently reminded me that I haven’t shared the vast majority of my photos from South Africa.

This is an elephant Adrian and I saw at Addo Elephant National Park. No more than 50 yards after turning onto a dirt road in the park, we saw a car stopped ahead of us, right before a bend in the road. Then we noticed several African elephants in the brush on our right side, including some baby elephants. We sat and took photos for a few minutes, stopped behind the same car, but eventually tired of staring at elephant butts.

The car in front of us decided the same thing at about the same time, and started driving forward, around the bend in the road. We followed. All of a sudden, they started reversing – not quickly, but we had no choice but to follow suit. Vaguely annoyed, we wondered what their problem was.

And then this guy walks around the bend and across the road.

African elephants are big. And they are not nice. They are very territorial and have been known to charge cars, houses, people. When an African elephant wants to cross a road, he crosses it as slowly as he wants to and gives the eye to anyone around.

We gave him plenty of space – the closest we were was when he surprised us, and that was at about twenty yards’ distance. Even as my heart was pounding out of my chest, I did the two most instinctual actions possible:

That’s right, Mom and Dad. I made you both proud 🙂