The first dayon the ship was a day at sea. We had a lot of Canada to get past before making it to Alaska. Unfortunately, it was foggy and cold for most of the day, so I didn’t take too many photos. And the ones I did take, I had to up the contrast a TON so they weren’t completely flat. 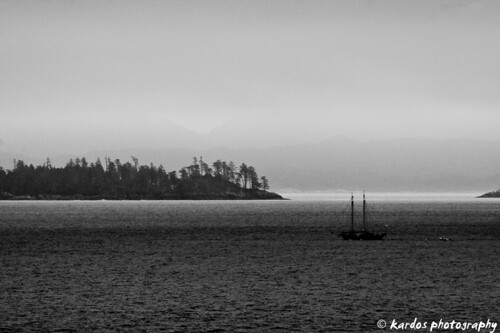 In the afternoon, I went to the “Solo Travelers Meet-Up” out of sheer curiosity. To see if there was anyone else my age on the boat. Because for the most part, the people were OLD. LIke grandparent old. And so many southern accents. Cruise ships have a weird demographic.

The meet-up consisted of about 10 people. Nine of them were women. Eight of us were mid-to-late twenties. And, by chance, on of the other girls was from Poway. Small fucking world.

I ended up in one of the bars that evening, with some of the other girls from the meet-up. At first the music was standard “Wedding DJ mix CD” – “YMCA,” “Electric Slide,” etc. I made the comment that if they played the Macarena I was OUT of there. But they didn’t, and we ended up putting in some requests for some more, ummm…recent?…music. And let me tell you, I’ve never been happier to hear Shakira and shitty hip-hop. I stayed there until about 1AM, at which point it was just too damn hot in the room to dance anymore. Combined wiht an early morning the next day, I figured it was a good time to call it a night.