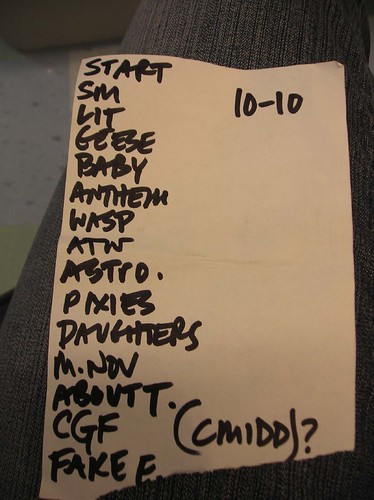 Disclaimer: The National has been, hands-down, my favorite band ever since Alligator sunk itself into a location deep in my brain, where it still resides.

That being said, I was absolutely terrified to listen to their new album, Boxer, which is now streaming on their MySpace page and is set to be released next Tuesday. Alligator was just such a perfect album. There are so many intertwining delicacies in it’s melodies, and so many intricate subtleties to its lyrics, all of which are immaculately translated in their live show.

But Boxer, which I literally listened to with crossed-fingers, is just as good as Alligator. There is not a weak song on the album, and several of them will continue to give me chills for months, perhaps years to come. Out of so many outstanding tracks, it’s hard to pick a favorite, but I’m going to go with “Start a War,” although that decision may be biased by this excellent Take-Away Show. While none of the songs failed to strike me upon first listen, all of them have continued to grow on me. They get exponentially better upon each listen, as I find myself delving further and further into the song structures. You could lose yourself for days in piano lines and brass sections, or in Berninger’s vocals. But even with the addition of more instrumentation, nothing ever sounds overblown. Everything is just…perfect.

Why are you still reading this review? Go out and buy Alligator if you don’t already have it, preorder Boxer, then sit back and stream the album. This band could never disappoint you. Oh, and buy tickets to their show at the Casbah with the Broken West on June 25th. I bought mine the minute they went on sale back in April, and there’s more than a slight chance that I’ve been counting down the days every since.