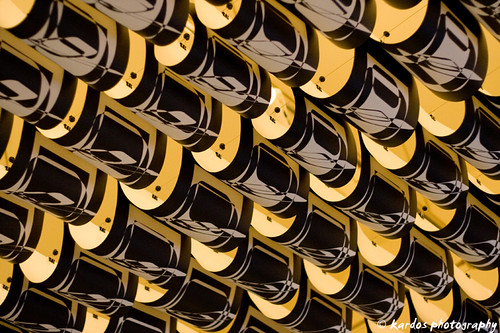 This photo was taken yesterday, but rejected for the 365 Days, 365 Photos project due to this photo.

This was the ceiling for the “Animated Painting” exhibit at the San Diego Museum of Art. I ended up there yesterday after trying to go to the Museum of Photographic Arts (it closed at 3PM for some sort of function), and I was quite pleased with that exhibit, as well as the other exhibits in the museum.

It was amusing though, because the first thing I said upon entering the initial gallery of the exhibit was, “Wow, I really like what they did to the ceiling to filter out the light.” Halfway through the exhibit, I saw a placard that seemed to be missing its artwork, and of course it was about the ceiling. Wit Pimkanchanapong (I took a photo of the placard to remember his name) was commissioned to create the installation space for the exhibit, and he used 7260 sheets of flame-retardant paper, 7678 binder clips, 8896 plastic stoppers, and wire to create the ceiling. The geometric designs on the paper actually change subtly as you go through the galleries, and near the placard was a video monitor showing the digital animation that resulted from the shapes. It was the sort of thing where you stood mesmerized by it for 5 minutes without even realizing all that time’s going by.

Also of note in that exhibit was a work by the late Jeremy Blake, which was accompanied by snippets of David Berman’s poetry.