Egads. Apparantly the Arcade Fire show Thursday night at Spreckels was not the only magically musical night in San Diego last week. Having missed that show for a clusterfuck at the House of Blues (see previous post), I’m doubly glad I trekked up to the Epicenter early Friday evening for the Explosions in the Sky show. Since the press list was small, Sarah of Motormouth Media was able to score me a plus one in addition to my own ticket, so Pete came with me. Everyone else that I knew who was into EITS was at Coachella, and well, “Fuck Coachella.”

We got there in time for opening act Eluvium. I was not really that into it. Having gotten a maximum of three hours of sleep the night before, I wasn’t really in the mood for loud droning ambient music. Maybe at another time or in another setting I would have been okay with it, but not then. All I can say is, I’m sure glad I had my earplugs with me, as anyone within a 10 foot radius of the side amp was standing with both hands pressed tightly against their ears. Kids these days – when will they ever learn?

Fortunately, the set change was short and I spent most of it trying to track down the manager of the Epicenter to get a wristband so I could take photos from the side of the stage. There was no way I was getting close to the front of the stage in that sold-out crowd. Finally got everything worked out (I’m not sure why I didn’t just ask for the wristband when I picked up the comp tickets) and abandoned Pete in the crowd while I watched the entire set from the comfort of side stage. Unfortunately, the dim lighting, combined with the fast-paced thrashing of the band members and the crappy angle afforded by the side of the stage didn’t make for such good photography conditions. In fact, I was only able to take any photos at all during the first song, because after that they dimmed the lights even more. So here’s a sampling: 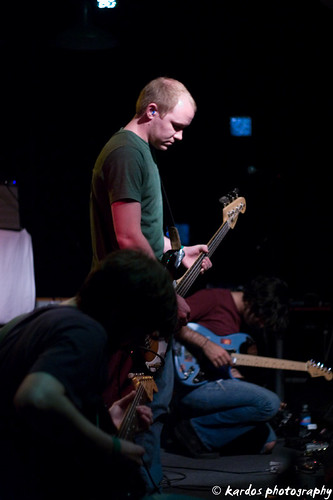 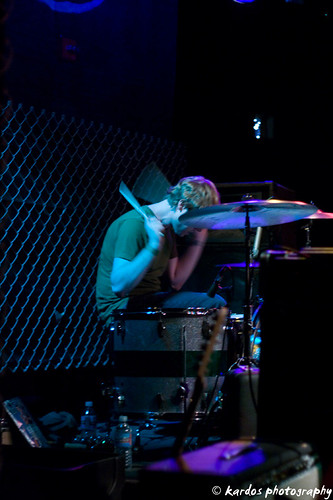 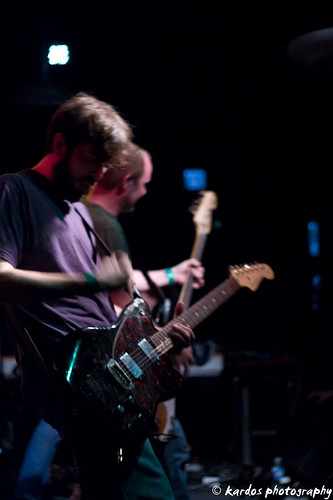 Unfortunately they don’t really convey too well what was really going on onstage. Each guitarist (including the bassist) appeared to have about seven pedals each, and they were getting all Sonic Youth-experimental with them. The double guitar melody lines were bobbing and weaving all over each other and managing to sound like bells at times. The sheer emotional catharsis was intense. As far as what songs they played, I believe I heard “Welcome Ghosts,” “It’s Natural to Be Afraid,” “First Breath After Coma” (which was my introduction to this incredible band), and “Your Hand in Mine.” There were others, but the point of an EITS show is not to emphasize individual songs. In fact, there was never a clear break between songs. Even tuning changes were accomplished while music was being created. Absolutely incredible.

The only time the band addressed the audience was to introduce themselves in the beginning, which was quite unnecessary for the crowd. After playing for about an hour and fifteen minutes, the band left the stage amid the most continuous and loudest crowd encore request that I have ever had the pleasure to hear. After a few minutes, during which the clapping and yelling never died down, and in fact grew only more intense, their bassist returned to the stage with an apology and the sad news that there would be no encore. All the band members were completely exhausted, and to appease the crowd (not that they really needed appeasing – not even an encore could have made the night better), he handed out chocolates. Quite the nice end to an incredible evening. I feel extremely lucky to have witnessed it.