I didn’t go to Street Scene on Saturday, even though I had a free ticket. Lack of a photo pass made most of the bands uninteresting for me (sometimes I’ll endure hearing a band I don’t care about just to take photos), and the few that were interesting just weren’t worth the drive down to Coors Amphitheater. Plus, there was plenty else to be done, what with planning a trip to the Grand Canyon next weekend and all.

However, Sunday I got a call from Jake of Roman Spring (who also does sound for Louis XIV) that he had a ticket and photo pass for me. So I hurried my way home from shopping for camping supplies at Costco, jumped in the shower, covered myself in sunscreen, and then headed down to Chula Vista.

After a brief mixup where Will Call didn’t have Louis XIV’s list yet, I headed in sans camera to check out Voxtrot’s set on the Captain Morgan stage. I had been pretty thrilled with their EP’s, but not so much with their full-length album. However, they put together a pretty rocking set, and while watching them I realized that they were the band I saw getting golf-carted around in the parking lot while I was waiting for my ticket. I really should get better at recognizing musicians, but that’s probably unlikely to happen.

After their set, I headed over to the Wrigley stage to meet up with Jake who handed off photo passes for The Album Leaf for Rosey and I. Then it was back out to my car to get my gear, which thankfully meant I could bring in a backpack to cart my sweatshirt around in. It was pretty warm during the day, but I knew as soon as that sun went down it was going to get pretty chilly.

After that it was off to the backstage “Artists’ Lounge,” which my photo pass got me into without a problem. And umm, I’m pretty sure the artists’ lounge was cooler than the VIP area that other people had to pay to get into. A big tent gave everyone some shade to lounge around on couches, get massages ($1 per minute), play air hockey or foosball, and grab food and drinks. You could also watch the acts on all the stages, courtesy of the many plasma screen TV’s hung around the tent. 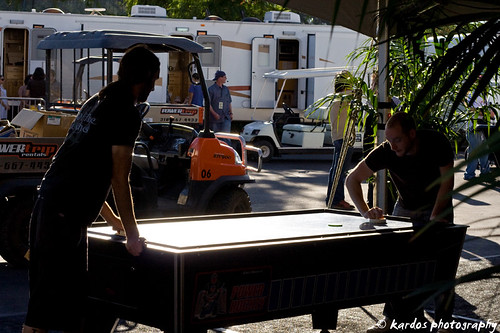 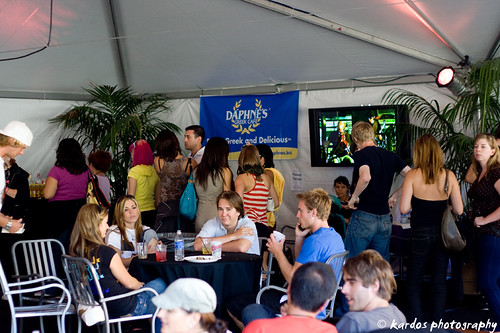 My next act of the day was The Album Leaf, who, as I already mentioned, secured me a photo pass for the day. That meant I was allowed in the pit for their set, but only their set. Of course, that didn’t stop me from taking photos guerrilla-style of other bands from the crowd. The Album Leaf sounded good for the few songs I stuck around for, but for me, it’s the kind of live show that’s interchangeable with listening to a band’s CD. So I headed out to try to catch a few minutes of The Editors’ set, but unfortunately they were done for the day. So back to the backstage lounge it was. 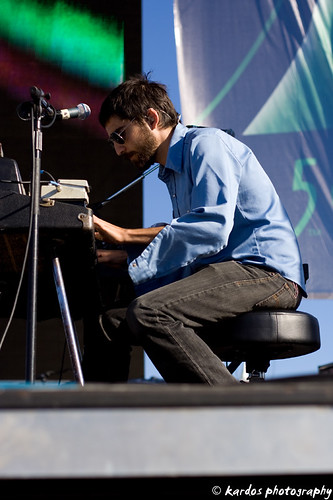 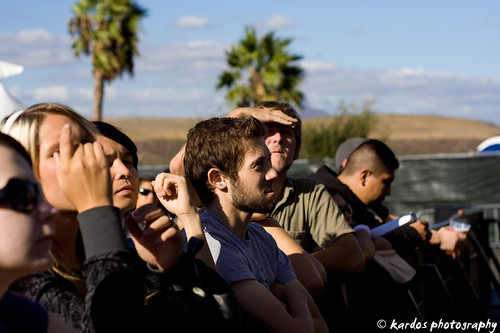 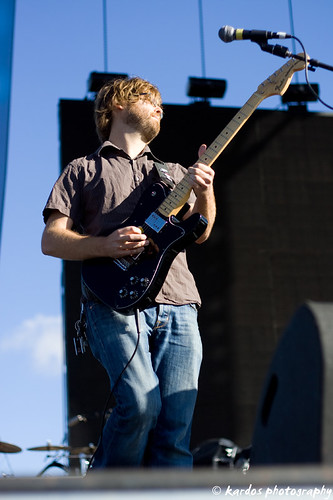 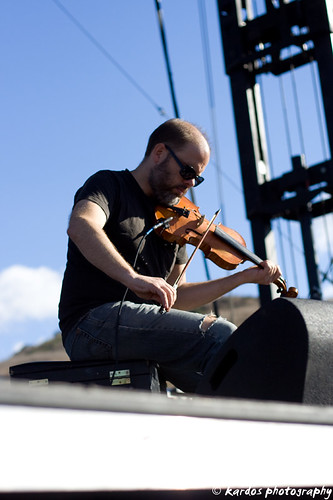 After that the day got a little crazy. After another drink and some food, I headed to the tent to catch a few songs of Simian Mobile Disco’s DJ set. 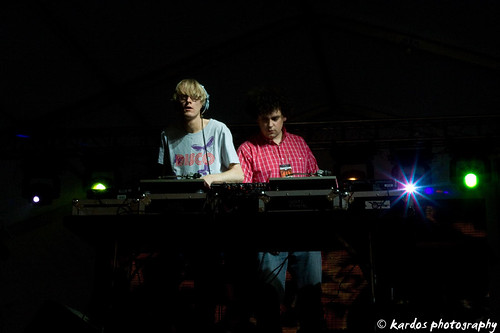 They got the crowd moving, which was good to see, but I already had plenty of tanbark in my shoes for the day so I left to see a bit of Clap Your Hands Say Yeah. I somehow had missed seeing them ever before, but I can’t say I know either of their albums that well. They put on a decent set, but the ADD was starting to kick in hardcore at that point, so it was off wandering the amphitheater grounds, killing time for Spoon. 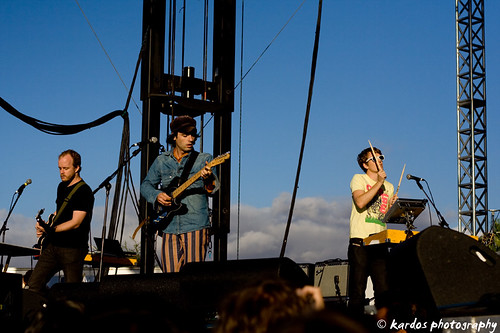 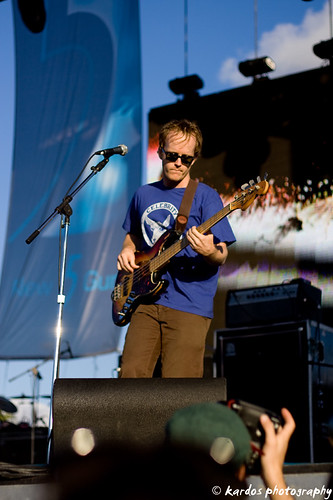 I ran into Molly, who always catches me at shows when I’m lost in thought and about to walk right past her. I also saw Nick and his girlfriend and Steph and Chris, which was nice because I haven’t managed to see any of them in awhile.

I made it back over to the main (Pacific) stage in time to catch most of Spoon’s set. I’ve seen them twice before, and Britt Daniel always manages to pull off a good show. He seems to have a good opinion of San Diego, as he’s played here for many local-type events (FM94.9 Independence Jam and Street Scene in years past), and he also mentioned that he’s going to come back and play the Casbah at some point. It’s just really nice to see certain bands like Spoon, The Flaming Lips, and the Hold Steady that really appreciate this town, even though they’re not from here. It almost makes up for the preponderance of negative feelings toward the San Diego scene, or what some people perceive to be the lack thereof. We’ve got good bands in this town, and good people that want to support those bands, and it’s nice when out of town bands get this. Anyway. 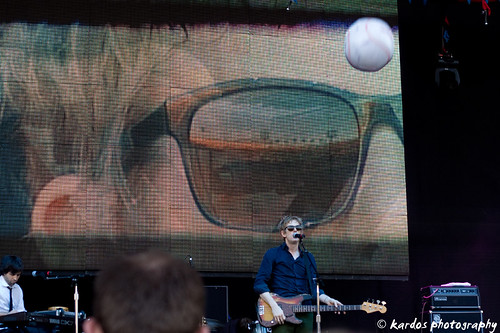 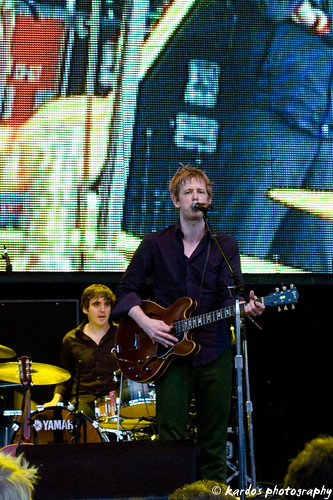 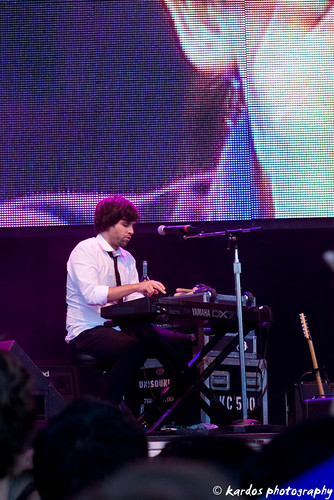 Spoon’s set consisted of songs both old and new, and they even had a horn section (trumpet, trombone and baritone sax) for some of their songs. Britt was in fine form, his voice suiting his songs’ melodies perfectly. His band was probably the only one that I really got into that day, and he’s the one band member that I sort of grew giddy over when I saw him backstage. But as you can see, he’s also a nice guy and let Rosey and I get some photos with him after his set. 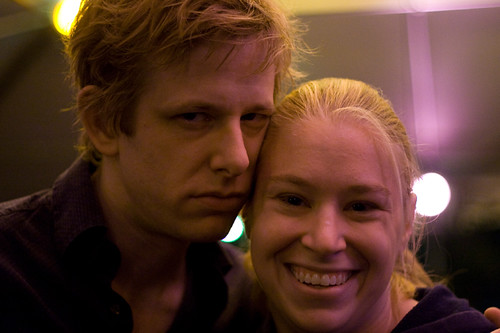 Me with Britt Daniel @ Street Scene 2007, shot by SD:Dialed In

After Spoon’s set, I didn’t really catch a whole lot. There was free booze and food to be consumed and friends to hang out with. I would have liked to have seen Air and the Arctic Monkeys, but it just didn’t happen. I did catch a few songs (and photos, before a security guard caught me) of Louis XIV. I’ve never been a huge fan of theirs, but their new material sounded great on the main stage and they really got the crowd into it. Ray from the Ex-Friends also looked awesome onstage with them, playing his violin. 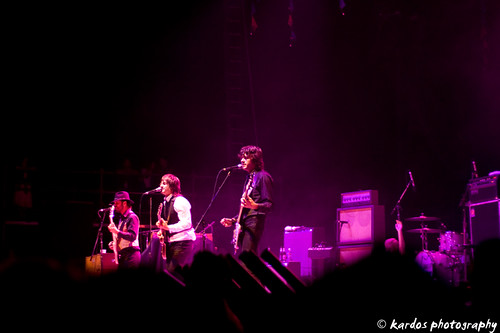 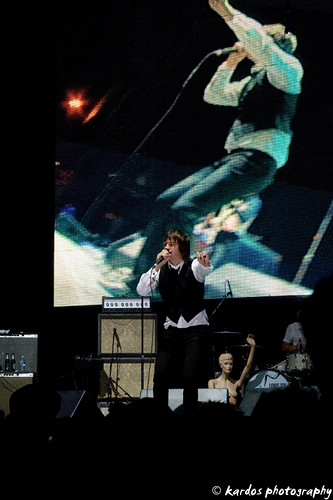 After Louis XIV’s set, I was back in the artist’s lounge getting another drink when I stumbled into a conversation with the trumpet player from Spoon. He ordered a whole bunch of drinks, more than he could carry away (or that the bartenders could allow him to carry away). Since I was only getting one drink for myself, in my drunken state of politeness I told him I’d help him out – assuming we were only going a few feet to one of the tables that were set up in the tent area. But no – we headed backstage backstage. To a dressing room. With the premise of getting the rest of the horn players together so I could get a photo of them (since I couldn’t manage to during their set), he left and I never saw him again.

I ended up hanging out with Zach and Ryan and another guy who all did sound for Spoon. After chatting in the room, we decided to head side-stage to see The Killers. It was pretty neat being up there for a few songs, seeing how The Killers’ live show has changed since I saw them about two and a half years ago at Rimac. There was confetti! And sequins! Brandon Flowers has really emerged as a frontman, ego aside, and the crowd was eating it up. Unfortunately though, we decided to move from the side-stage scaffolding because the security guards kept checking everyone’s passes. 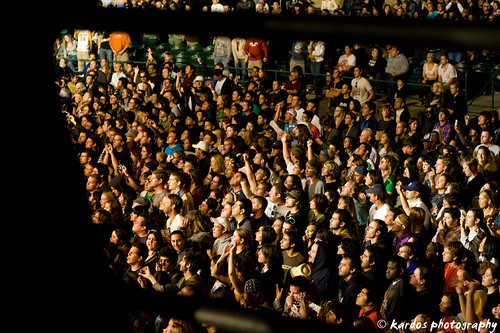 crowd for The Killers @ Street Scene 2007, shot by Natalie Kardos

I lost the guys from Spoon when I ran into Dusty and Andrew from the Swedish Models, and that was it as far as music went for me for the night. I left the venue shortly after while The Killers were still wrapping up their set. Getting out of the parking lot wasn’t that bad of a hassle – it just took a bit of patience and semi-aggressive driving on my part. I could have done without the long drive home, though.

All told, I had a great fucking day. Although I have to admit, it had almost nothing to do with the bands I saw. Mostly it had to do with the people I met, the friends I hung out with, and the hospitality that was offered to me, with my lowly one-band photo pass. As far as the outlook for Street Scene, I’m torn. I loved it two years ago when I saw The Flaming Lips, The White Stripes, and The Pixies, among a host of other bands that I gave a shit about. And yes, that was one of the years it was in Qualcomm, and I for one didn’t have a problem with it. Coors Amphitheater was an okay alternative venue for Street Scene, in my opinion, but the lack of public transportation combined with the $10 charge for parking in a place where THERE WAS NO ALTERNATIVE kind of got under my skin. On the other hand though, I have two words – flushable toilets – that were made available to everyone and kept clean throughout the event. So I guess it came out even. 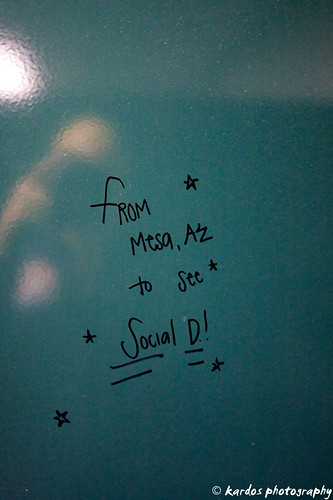 But at the same point in time, the lineups have been getting weaker and attendance is down (possibly related to each other). Really, the only reason I went on Sunday was to see some bands and because I had a free ticket and limited photo pass. No way was I going to pay 70-some dollars for that event. So my perspective is skewed when I say I had a great time, but there were plenty of folks there who didn’t have guest/backstage passes and they looked completely content. So who knows?