Yesterday was sort of a day of errands and then relaxing for me. Lame, I know, but I spend too much time working/going out to get that stuff done on a normal weekday or even weekend.

In the evening, I headed to a friend’s house in Banker’s Hill for a BBQ and to watch the fireworks. The BBQ was excellent, with some steak and leftover food from Leslie’s defense party. I tried to take some photos of the planes coming in over downtown, but they didn’t really turn out too well. If it was earlier in the day, I would have had better results, but oh well.

I was promised a roof view to the fireworks, but unfortunately the ladder to get up there was blocked off, so we had to settle for a tiny little balcony instead. No place to set up my mini travel tripod, so no long exposure photos of the fireworks like I had hoped. Damn.

Now it’s all grey out and all I want to do is take photos instead of doing science. This may have something to do with the fact that my right hand has been hurting me for about two weeks now. It’s definitely due to too much pipetting (i.e. moving around small volumes of liquid), but there’s not much I can do to ease up on it. That’s probably what they’ll tell me to do at the doctor’s tomorrow, but I need to get my Ph.D. in some sort of timely fashion, people. Even if it means that my hand will hurt and my wrist will continue to snap, crackle, and pop every time I rotate it.

I’ll leave you with some more archived B&W negatives that I scanned in a few days ago. The first one prompted a comment from the class instructor that “It looks like some sort of East Coast city scene, not San Diego.” Even so, it was taken in UTC, probably on a grey day like today. 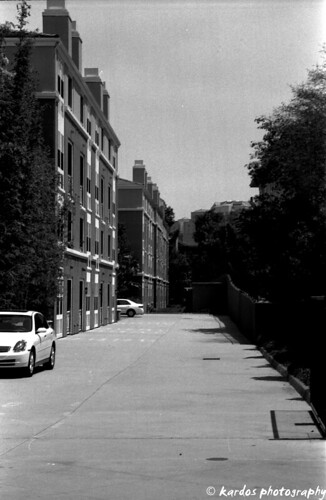 The second one was taken one the same day. I quite like it – the print I made from it is hanging up in my apartment because, well, I’m too poor to actually pay for art to hang up on my walls. 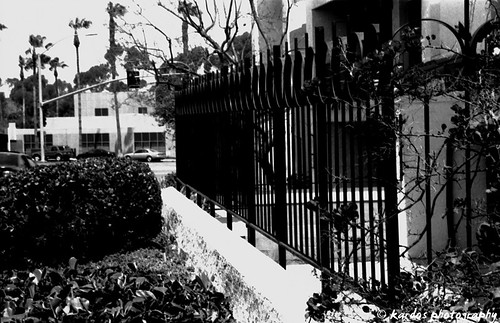 I still find it interesting that the same negatives I liked 2 years ago are the ones I like now. Even if my own photo technique was lacking at the time, I knew what I liked to see in the finished product.