Grand Canyon on My Mind 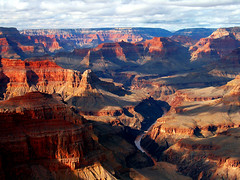 Thursday’s trip to LA, combined with the recent autumnal weather, awoke in me a restlessness. I always get this way in the fall – or at least, I used to when the fall used to feel like the fall (i.e. on the East Coast). I yearn for road trips and adventures and stories to tell for years to come.

I haven’t gone on a real road trip since I’ve moved to California. In college, Joe and I used to head out of State College at least one weekend a month, whether it be to Philly to catch a show, DC or Pittsburgh to visit friends, or “down the shore” to experience New Jersey at its finest. But out here, they just aren’t all that appealing. There’s no call to the open road, because the roads usually aren’t all that open. Driving is more frustrating than liberating, and travel turns into a nightmare – a rush to get somewhere just so you can get off the road.

But driving into work on Friday, I was struck by the idea of a road trip to the Grand Canyon. I haven’t been there since I was in high school, and P’s never been there. Instead of going to the more popular (and more easily accessible) South Rim, we’re making an adventure out of it by going to the North Rim. Since it’s 1000 feet higher in elevation than the South Rim, and consequently much less desert-like, I’m hoping for some fall vegetation and temperatures. There’s nothing better than being snuggled in a sleeping bag with crisp air outside.

Oh, and as for when we’re going? Ummm, this coming weekend. While it may be crazy to plan a trip like this in such short amount of time, we’re doing it. The campsite’s booked, the Costco trip was made, and I’m already scheming up cool photos I want to try to capture. Like some long-exposure views of the canyon at night with star trails above, or maybe some night landscape shots with some light-painting of various objects.

I cannot fucking wait to hit the road at 6AM on Friday.