I spent all of Coachella in crowded photo pits, dodging lenses and extra camera bodies swinging from other photographers’ shoulders. But for the most part, everyone was professional and polite. Then I come back to San Diego, to a show at the Casbah (a crowded one, but still), and have to deal with this: 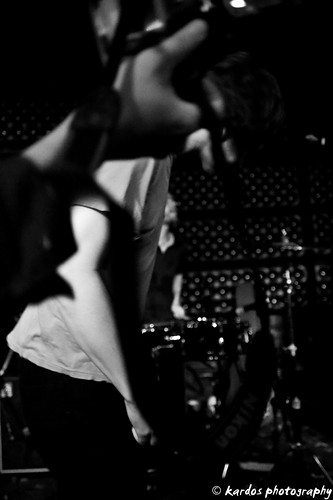 You might have some trouble deciphering what’s going on in the image at first. That’s because my camera was focused on the shot I was planning to take of The Muslims. Instead, I got a nice out-of-focus shot of the camera (Nikon, as the strap reads) that someone shoved IN FRONT of the photo I was taking.

I already have issues with people taking shots without looking through their viewfinder. But when that shot gets directly in the way of a shot I am obviously taking, I get pissed. I hope photo karma comes back to bite you in the ass. Or maybe, next time that elbow I threw in your general direction won’t be so subtle.

Manners, people – if you disregard them, I can too.