So. Radiohead. This was my first time seeing them. I have to admit, I was a very, very, very late bloomer when it came to them. Which is hard to admit, because that’s a music blogger death sentence right there. 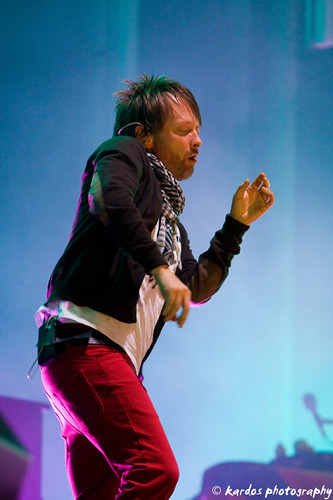 Let me explain myself. I dated a guy all through college who was WAY into them, and really just had better taste in music in general. I attribute this entirely to the fact that he grew up in Philly, while all I got was Harrisburg. It wasn’t until college that I even realized any other type of music existed besides classic rock and top 40 music. 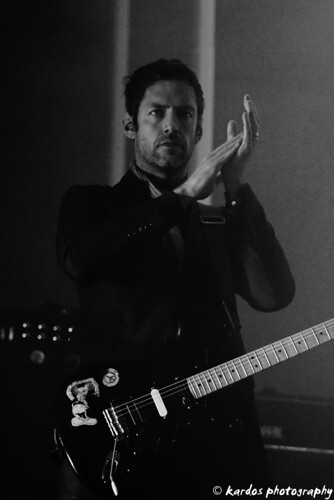 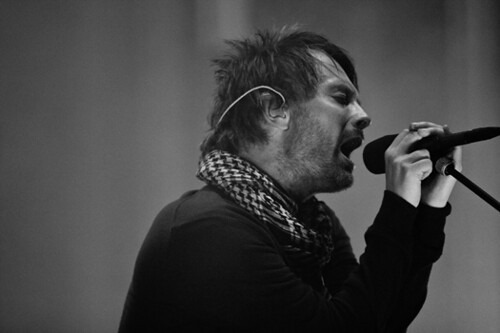 I’m usually a quick learner. But my first introduction to Radiohead was Kid A, not something more accessible like The Bends. So I think it’s somewhat understandable that I said, “I just don’t get this,” and proceeded to mostly ignore them for another couple of years. But due to a merging of said boyfriend and I’s album collections, all of Radiohead’s albums, from Pablo Honey to Hail to the Thief and everything in between, followed me across the country when I moved to San Diego. And they’ve managed to survive on a succession of hard drives ever since. 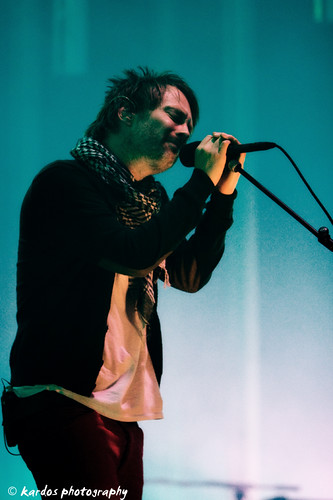 And then one day P told me to listen to The Bends after I used the “I-just-don’t-get-it” line in his presence. And DUH. That album hit me like a ton of bricks, twelve years after its release. Late bloomer indeed. 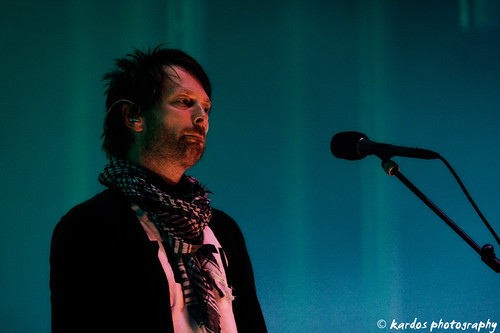 I’ve been digging on In Rainbows since it came out, as well as delving into all that music that’s just been sitting on my hard drive, waiting for me all these years. And well, it doesn’t seem to hate me for being neglected for so long. Thank god. 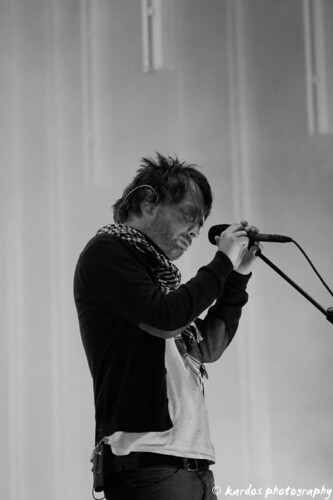 So, with that confession out of the way, let’s talk about the actual show. 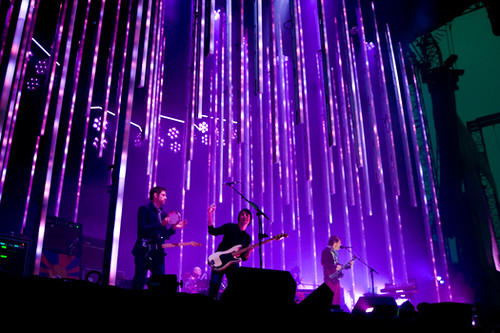 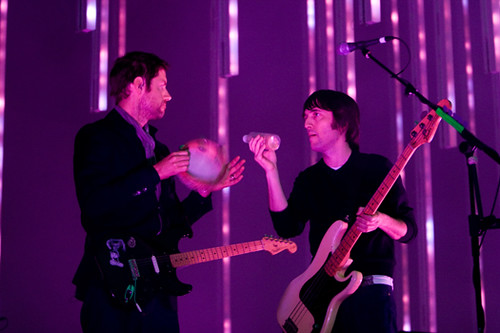 As Radiohead took the stage, the fog was rolling in, and they added some of their own to the mix. Perfect ambiance, but not-so-great for photos. I was freaking out the whole time in the pit, thinking I wasn’t getting anything good, switching from aperture-priority to shutter-priority to full manual and just making it up as I went. I looked at my screen maybe three times total? And walked out of the pit thinking I got NOTHING good. In the end, I think I did okay… 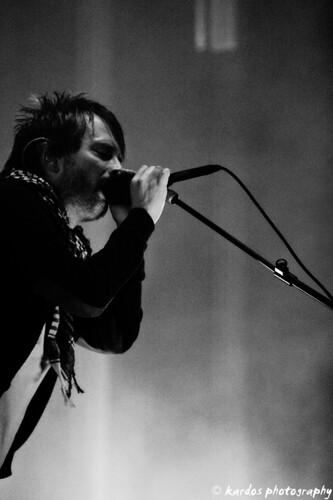 (This one’s my favorite.) 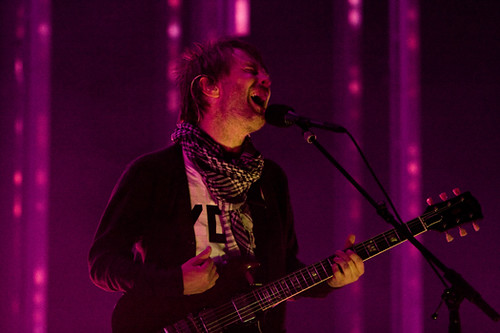 Then I wandered around the grounds, trying to find a decent spot from which to watch the rest of the show. I ran into some girls hula-hooping during “Videotape” and couldn’t resist the urge to muck around with some slow shutter speeds and second-synch flash. And then I decided to just put the camera away and enjoy the damn show. 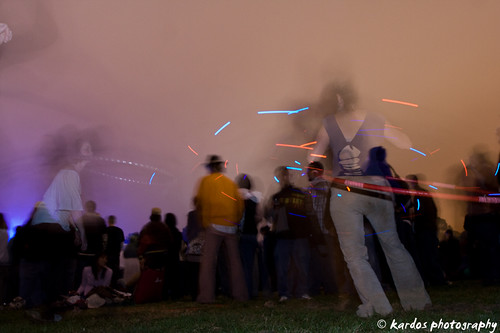 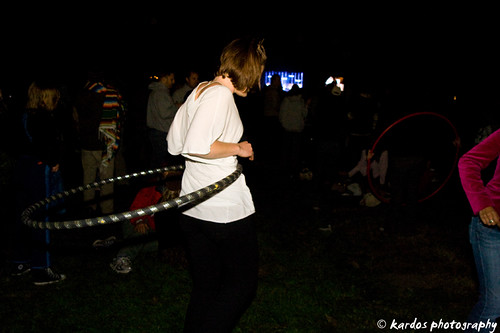 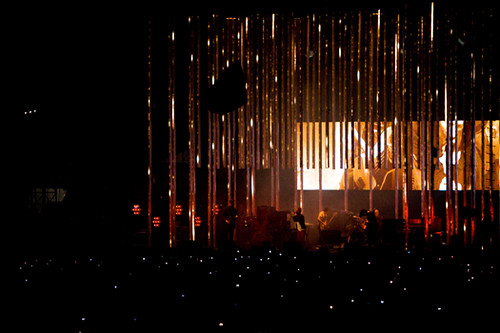 And it was awesome. I think I had an emotional melt-down during “Fake Plastic Trees.” No tears, but shaking all over, and (possibly) one ill-advised, overly-emotional text message. Ah well. It happens. Thom Yorke’s voice is absolutely amazing and ethereal floating across a crowd like that. I managed to lose myself in both the crowd and the music for a good part of their set. Towards the end, I found British Joe and Jess. After Radiohead finished, I ran into the media area to use some thoroughly disgusting bathrooms (but no line!), and while I was in there, people broke down fences in a rush to get out of the park. British Joe was holding my camera gear at the time, and shot this really awesome photo of it. I’m jealous that he got it and I didn’t. 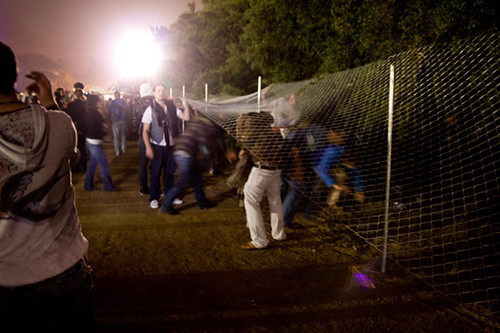 And then we followed the crowd through multiple fences and ended up walking around to the other end of the park. And then we kept walking, because there was no way possible to get on ANY bus on ANY road in the area. At some point we started trying to flag down cabs. I have no idea how far we walked – just that it was FAR – but we eventually got to Mel’s Diner. Joe had ridden his bike back to the apartment by then, so he got a car from CityShare and just came out to meet Jess and I. We shoveled down food as long as we could, until tiredness overcame us and it just took too much energy to chew.