Since getting back from Alaska, I’ve been kind of struggling with photo ideas around San Diego. So when Kelly suggested a trip out to the Salton Sea, I jumped at the chance, even though it meant dealing with 105 degree heat.

We left San Diego around 12:30 in the afternoon and made a pit stop at the Julian Pie Company, because really, who doesn’t love some pie? I could probably eat pie for every meal.

We made it to Bombay Beach around 3:30 or so. And man – it was hot. Hotter than Coachella. Hotter than anywhere I’ve ever been, probably. We walked out to the beach, all the while feeling like all eyes in the mostly deserted town were on us, peeking out from curtain corners. Let’s just say that all the “no trespassing” signs, fences, and barking dogs didn’t make for a very friendly atmosphere. 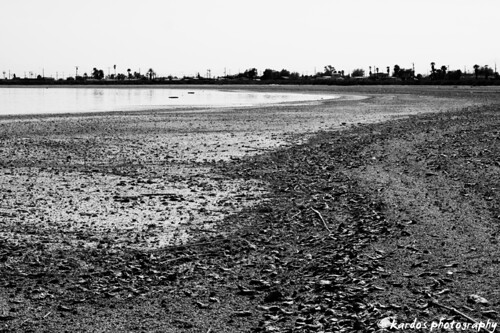 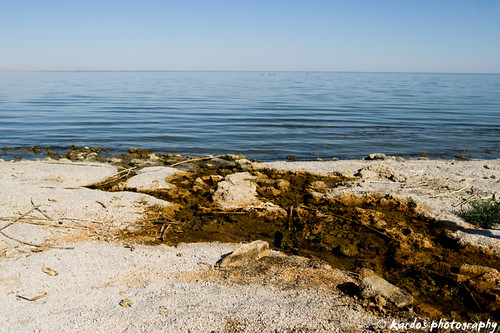 So, the beach. It was filled with dead fish. At a certain point, we reached what we termed “the fish line” – basically the point where there were too many dead fish and the smell was too…overwhelming…for us to walk any further toward the water. So we skirted that line for a little while, watching all the birds flying over the water. And let’s just say that Kelly and I’s decision to wear flip-flops was sorely regretted. 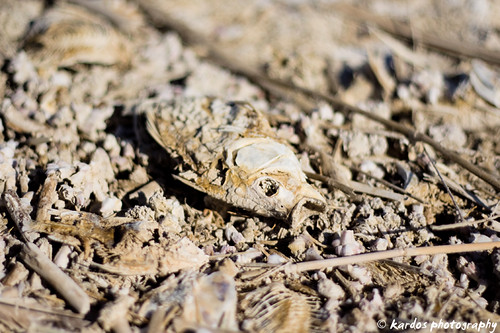 Have you ever been walking around after a heavy rainstorm, and all of a sudden you look down and realize that your path is absolutely covered with worms? Worms you had no idea were there until that point, and now they’re everywhere. It was kind of like that. But with fish. Yikes. 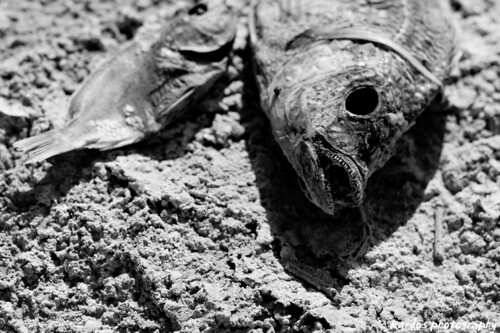 I sort of wanted to muck around in the abandoned buildings in the town, but it was too damn hot. And we were worried about the other townsfolk, who we really didn’t want to bother. So we left Bombay Beach with the air conditioner in the car running full blast and headed toward Salvation Mountain. 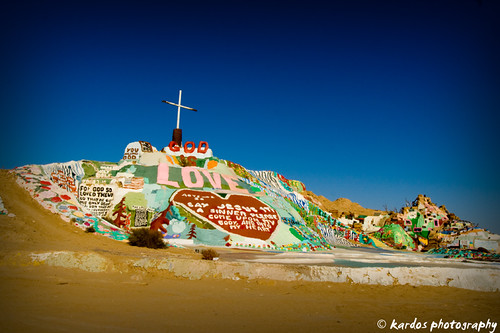 I had no idea what to expect, as the whole trip was researched and planned by Kelly. But it was definitely not a mountain made out of clay and painted in bright colors, proclaiming “God is Love.” 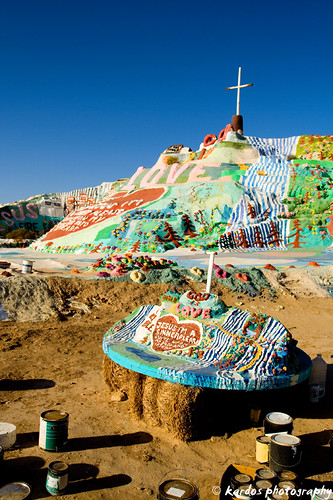 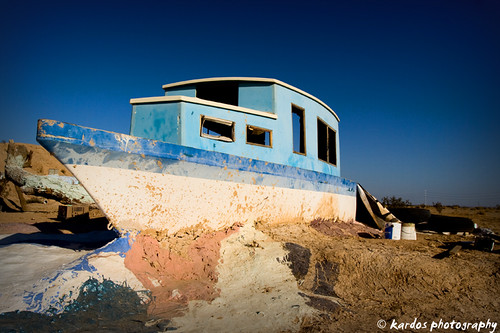 Upon seeing that, we sort of expected someone to come out and preach to us in some manner. But the place appeared deserted at first, and we wandered about a bit. And then we ran into the creator, Leonard Knight. He was extremely friendly, and never once mentioned religion to us. Nor did he ask us for donations. In fact, he gave us each a DVD about his art project, as well as a picture puzzle. Really nice man, and truly someone who is dedicated to his art. He was quite inspiring, and if I’m ever out that way again, I’m going to be sure to swing by with some cans of paint. 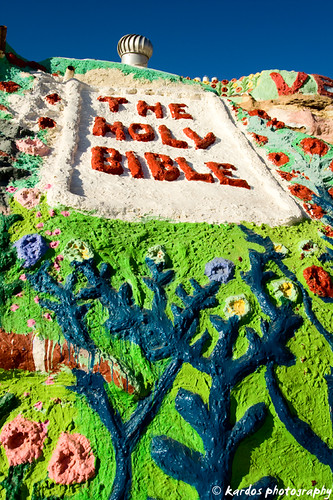 From there it was on to Slab City. We mostly just drove around the area, but then we found what we thought was a trash dump with an overturned and gutted motor home, so we decided to go check it out. As we wandered about, looking at all the stuff strewn about, it became apparent that it wasn’t really a trash dump. 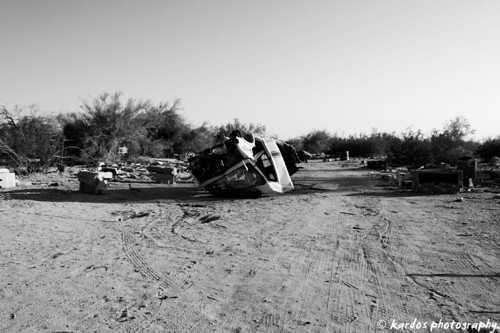 It looked like someone’s entire life that had been ripped up and thrown out in the wind. Little kids’ crayon drawings. Old magazines from 2004. Pieces of a house. Overturned couches with ripped cushions. It turned from an exciting junk yard into a tragic mess real quick. We got a bit spooked by it, in all honesty, so we decided to get the heck out of there. 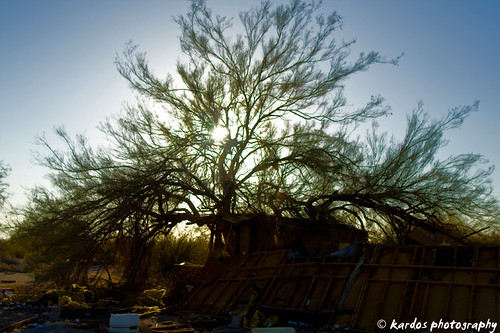 We were thinking of getting something to eat before sunset, but we couldn’t find a single restaurant open in Niland, so we started heading to the west side of the sea to watch the sunset. But somehow we managed to get a little lost on some farm roads, which was kind of disturbing, considering that a) there’s nothing/no one around; and b) everything looks the same. Hard to trust your sense of direction in that situation. But after a few tense minutes, we stumbled upon a wildlife refuge area, which thankfully had a nice large map showing the roads we needed to take to get out to Westmoreland and the highway.

It also happened to be situated about a half-mile from the shoreline. So we figured that was as good a spot as any, and considering the sun had already dipped below the horizon, we walked out to the sea to catch the last of the sunset. There were some pretty amazing colors, a lot of birds, and no dead fish (or even dead fish smell). It was quite peaceful, actually. 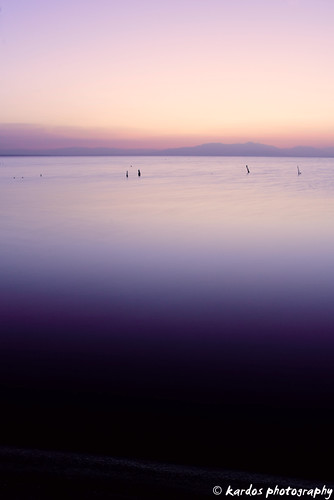 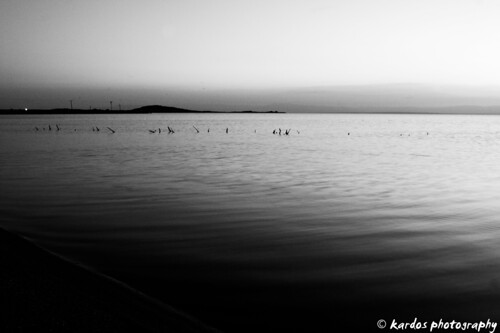 So we sat there for 10-15 minutes, then decided to walk back to the car since we were losing the daylight. Kelly almost stepped on a snake on the walk back, which was kind of frightening, but not nearly as bad as the time I was hiking in Joshua Tree and spooked a baby rattlesnake. No rattle this time, but even so, we all watched our feet as we made our way back.

When we reached Westmoreland, we were worried that, it being Sunday (and the middle of nowhere), we might not find any restaurants open. But as luck would have it, we stumbled upon a really nice steakhouse. I’m not terribly sure what a restaurant of that quality was doing all the way out there by the Salton Sea, or how they managed to turn a profit. But I was incredibly glad that we found it, and I ended the day with a sirloin steak. And promptly fell asleep in the car afterwards, and was out of it for most of the drive back.