Whilst most everyone else in town was at the Vampire Weekend show at the Casbah last night, I decided to go for the more mellow (and not sold out) option of seeing Bon Iver at the Che Cafe.

Of course, after Tuesday night, mellow was more my enemy than my friend. I had barely five hours of sleep coming off a pretty rough weekend, and the prospect of staying on campus for 14 hours straight wasn’t exactly appealing. Any lesser of a band, and I would have bailed around 5PM for home and my bed. Instead, I found a secluded couch where I ended up taking a nap – for 2.5 hours.

I showed up at the Che a little before 9, and wasn’t sure whether or not to be surprised by the number of people there. Bon Iver has been getting plenty of blog love themselves, especially coming off of SXSW, and with the other hipster option of the evening having been sold out for weeks (and possibly on the verge of no longer being hip), it made a certain amount of sense that there was already a fairly large crowd – relative to the size of the Che, that is. However, there was still that trusty two feet in front of the stage that people were too timid to occupy, so I made my way in that direction.

The Paddle Boat was on first. Three-fourths of their lineup is drawn from The Vision of a Dying World (Jeremy on guitar and vocals, Jackson on bass, and Jona on drums), rounded out with clarinetist/sometimes vocalist Jane. When they got onstage and realized that they were all sitting down in front of a rather large crowd, Jackson asked everyone to sit on the floor so that it would be easier for everyone to see them. And we were more than happy to comply, and it ended up being perfect for the ambiance that their music created. Their music definitely fits in that old timey, sitting around a campfire type of sound – and in case you don’t pick up on it, they have the props to make it all the more obvious: 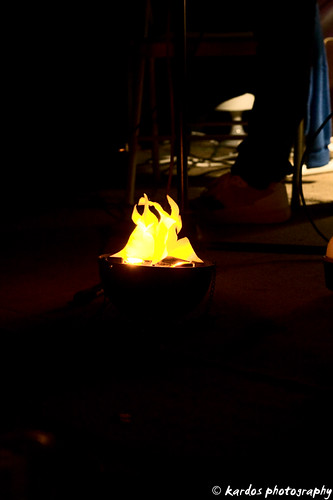 (it’s an electric bonfire)
I really enjoyed their set, which is fairly predictable, given that I liked The Vision of a Dying World that one time I saw them (seriously, I need to see them more). Jeremy was the main vocalist and he sounded great, but at one point Jane sang lead on a cover song (the name of which is escaping me at the moment). She has a really good voice, even though she seemed a tad nervous about it. Jackson added in some vocal harmonies, which just sealed the deal for me. There’s a fairly good chance that I’ll be seeing these guys again at the Whistlestop tomorrow night.

After they ended, everyone stood up to stretch their legs while Bon Iver set up. But as soon as they got onstage, Justin asked everyone to sit down again. It was a little harder to comply this time, as more people had crowded in, but we all managed it. Usually I dislike sitting down at concerts – I feel like it takes away the energy of the crowd and makes the audience less of a participant in the experience. But maybe that only applies when people are sitting in chairs. Sitting on the floor, crowded in close with other fans, was the perfect environment in which to see a band like Bon Iver. 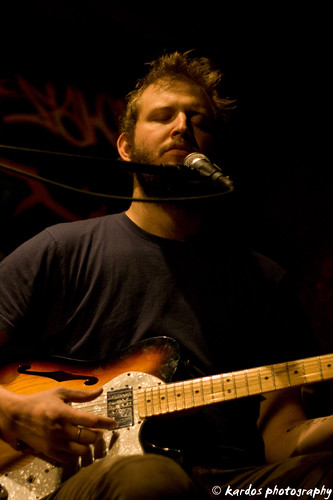 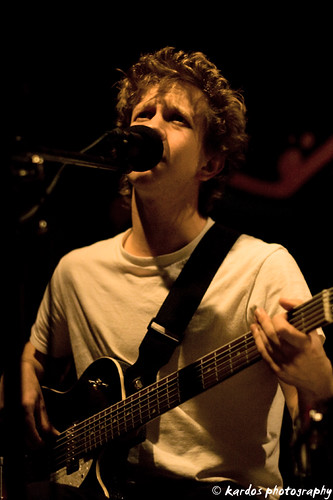 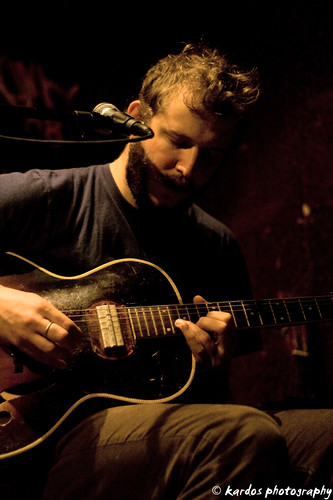 They played a set which surprised me with how rockin’ it was. By now, everyone’s probably heard the story – the album For Emma, Forever Ago was recorded by Justin alone, in a cabin. The songs were supposed to be demos, but somewhere along the line, someone told him the demos weren’t demos. They were the album. And in order to avoid misrepresenting the album, it has its moments of urgency and intensity. But on the whole, it’s mostly acoustic guitar and Justin’s falsetto. However, live, with the addition of a second guitarist and a drummer, the songs really come to life. There were moments where Justin busted out guitar solos that were almost Clapton-esque in speed and style and perceived ease. 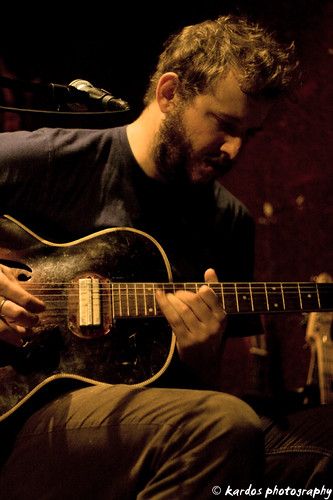 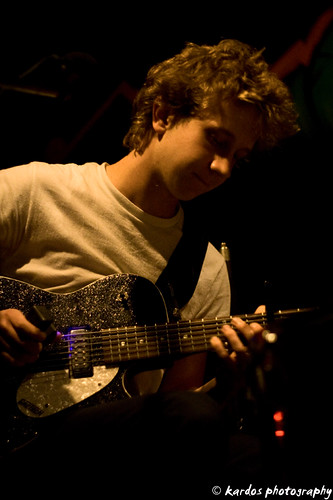 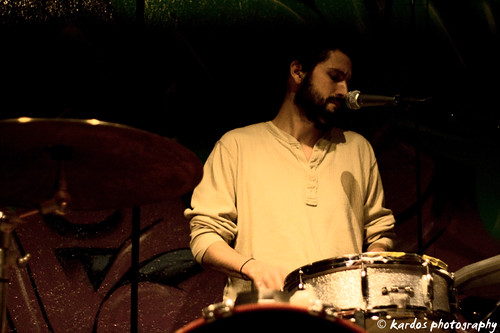 The other members of the band had their moments as well. It’s really nice to walk into a show having an idea of what the night’s going to be like, and then to have that idea blown completely out of the water. After breaking a string on one of those ridiculous guitar solos, Justin decided to end the set a song or two early – by bringing the whole band out into the middle of the seated crowd to play my favorite song off of the album, “Skinny Love.” I captured some video of it – I apologize for the fact that there’s not much to see on it, because all the lights were out, but the sound quality makes it worth a listen:

I also snagged some video of The Wolves (Act I and II), where there is some kickass audience singalong going on:

After “Skinny Love,” I skipped out on Phosphorescent’s set because I had other places to be, and also because I really didn’t think there could possibly be any better end to the night.
Posted in Uncategorized