Tuesday was a strange day for me. I was out of the door by 6:45AM to catch a bus downtown to go to jury duty, where I ended up being excused because of the whole grad school thing. So I made it home by 9:30ish, where I promptly passed out on my bed for a few hours. Then it was an errand to the post office, after which my car wouldn’t start, so I decided to grab some lunch by myself at Urban Solace while my car hopefully magically fixed itself.

Lunch was amazing – I had the Monte Diego sandwich. I’ve never actually eaten at a restaurant by myself, and I have to say that I enjoyed it, at least for lunch. The place was quiet and calm, the service was excellent, and I got to sit on their patio and read a book while eating.

Unfortunately, my car didn’t magically fix itself. I figured it was a battery or starter problem – strange because the battery was fairly new and there were no previous signs of starter problems. A nice guy stopped to help me out, but didn’t have jumper cables. However, while we were looking at the engine, I realized one of the screws that hold the battery cable to the actual terminal was loose. After tightening it, the engine started just fine.

After a little more time spent at home, I headed out to M-Theory in Mission Hills to catch Grand Ole Party’s in-store set. The set was in celebration of the release of their album Humanimals on actual CD and vinyl – it’s been available on iTunes for some time now. But somehow, I still don’t have a copy. For shame.

I got there at about 5:45 and was surprised that the store was still pretty empty. I grabbed a spot up front with my camera and watched the store quickly fill up with more people. By the end of Grand Ole Party’s set, the entire place was packed, with some people outside on the street. Prior to their set, their record was playing over the store’s stereo system, which Kristin remarked was kind of awkward. I can kind of see that, but their record is no substitute for seeing them live, for seeing Kristin sneer and snarl while singing and banging her drums. 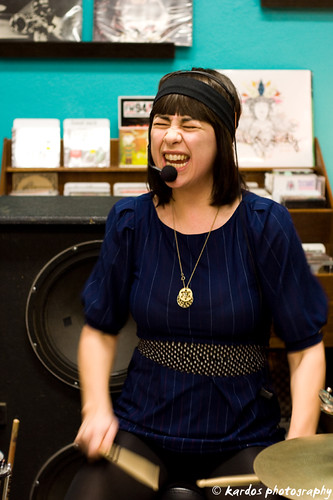 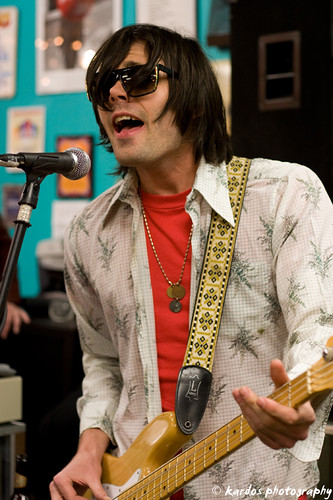 The whole band seemed more polished and just…cooler since returning from their tour with Rilo Kiley. They could still use some work on between-song banter, as evidenced when their guitarist broke a string right before their last song and stopped to change it out. It was in this space that we saw the true contrast between Kristin’s on- and off-stage personalities. On-stage, she’s a warrior, a she-devil, a loud, wailing woman who exudes confidence and is the living embodiment of intimidation. Off-stage, she’s quiet, demure, and almost able to blend into the background, if it weren’t for those damn cute outfits she wears. There was a slight awkward attempt to answer some questions from the audience, but in the end, they ended up playing “Look Out Young Son” off of their record until the string was fixed – a song they had just finished playing, which turned out to be even more awkward. 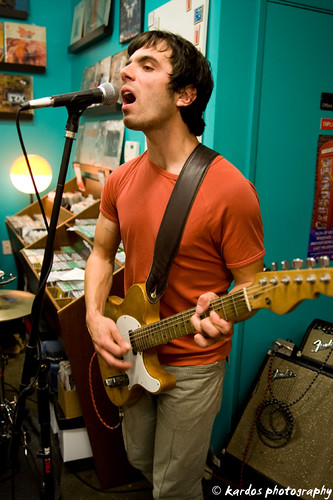 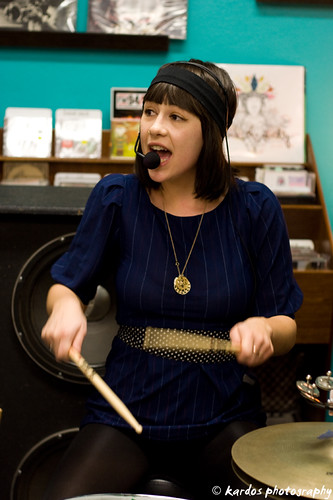 But that was pretty much the only lacking part of the evening. The band was tight and pumped out their even tighter songs with Kristin wailing and pounding away with a ferocity that was almost scary. I was left quite in awe of her. Since we were a hometown crowd and, in Kristin’s words, “might be a little sick of hearing the old songs” (I’m not), they played some new ones that sounded just as good as the old ones, and no less tight. At the end of the set, they teased us by saying they might play two more songs, but the bassist nixed that idea and they only played one. At least for those of us wanting more, there’s always their show at the Casbah with The Prayers on Valentine’s Day…