Last night was a weird night for me, for a variety of reasons that I’m not going to get into here. We got to the Beauty Bar for Building Better Monster’s last song, something about “high fives,” so I don’t think I can really write a proper review of them. Also, I didn’t have my camera because I wasn’t really feeling up to dealing with the lighting challenges at the Beauty Bar, so no photos.

During the set break, I found Dusty and Andrew from the Swedish Models, and basically we determined that I should hang out with the band as a whole and get to know everyone before even bringing my camera out, which is sort of what I had in mind to begin with. Again, I’m really excited about their upcoming EP, and I’m incredibly flattered that they want me to be a part of the process.

I hung with those guys (and Matt from Vinyl Radio) for some of the Light’s On set. My overall impression of Light’s On was that they are a very synth-y, Cure-esque band. They played really well, and on any other night, when my head was in the music, I would have been much more into them. The friend who came with me dug them a lot, but then again, he’s a huge Cure fan. Me, well, I was 8 when the 80’s ended, and I never really went back to visit that era of music. Blasphemy, I know, but whatever. It’s on my list of things to do, so maybe someday I’ll get to it.

Afterwards, I hung out with the Vinyl Radio/Swedish Models guys for awhile, but when the DJ put on some sort of Rage Against the Machine remix, I knew it was time to head home. The Beauty Bar has this weird scene that I’m still trying to figure out. Lotsa interesting hair last night, that’s for sure.

To make up for the lack of photos from the show last night, I leave you with this: 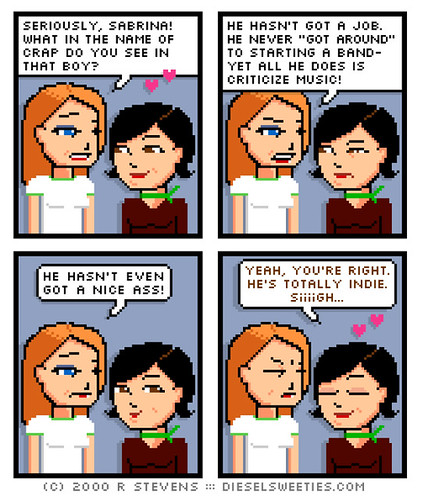