I’m always the slow one in reporting on shows. Partly because I have to actually write the review, which takes time, and I don’t have as much of it at work as I used to because the science is taking off lately. But also because I have to process my images. I don’t edit them too much – no cropping, usually as a rule, just slight color adjustments and exposure compensation-type things. But it takes time. Oh, and also going through the photos and pulling out the small percentage that portray what I want them to. Lately I’ve been getting more and more stringent with what I post to Flickr. I like to think that this means I’m developing my own sense of style. Or something.

Anyway. I skipped out on the Independence Jam on Sunday for a variety of reasons. I was unable to wrangle a photo pass, and using a point-and-shoot just isn’t worth it for me anymore (unless I’m drunk and paranoid about wrecking an expensive camera). Also, paying $40 for a show in which I’ve seen all 3 headliners before wasn’t worth it either. Spoon I saw at Street Scene a little while back. I like their recorded stuff, but live they didn’t really do anything for me. Same goes for Interpol when I saw them at Soma about two and a half years ago. Meh. And Kings of Leon? I still hold a grudge against them for what they subjected my ears to when they opened for Ben Kweller back in 2003 or 2004. Have not listened to an album or gone to a show of theirs since out of protest. Stubborn? Just a tad.

Wow, can you say digression? After not making it to the Independence Jam, I did manage to get myself to the Casbah for the official afterparty. Missed Monster Bobby completely. We must have gotten some of the last tickets to the show (no list love this time) when we arrived at about 9:45. The place was a little more crowded than I had imagined, and it filled in quickly. I had no idea so many people would be rallying after being at the Independence Jam all day.

Smoosh took the stage shortly after we arrived, and I positioned myself nicely at the front left of the stage. I love, love, LOVED that they had the drum kit front and center. Drummers are usually the more interesting musicians to photograph, and this girl was no exception. It was great to see her big-ass grin everytime she got to beat the shit out of the drumkit. 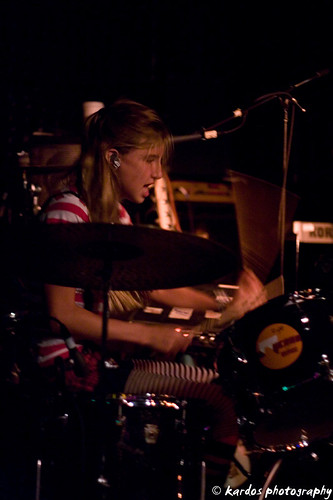 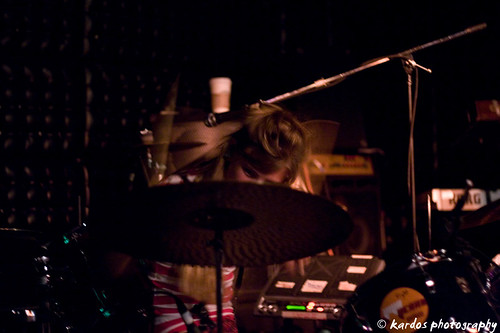 The girl on keys was a little more reserved, but still looked like she was having a great time.
Which anyone would, if they were in their teens and making tons of new fans among older hipster-types. It was really amusing to see people twice and three times these girls’ ages getting so into their music. 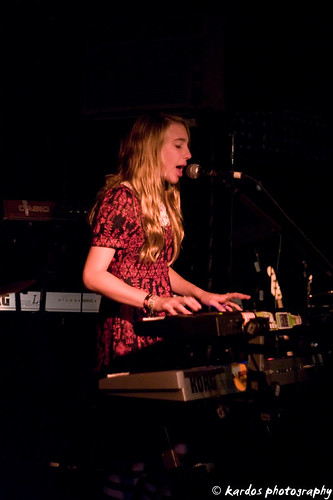 And then there was the littlest sister, who came out to play bass on two songs. All I could think was, why wasn’t I playing bass guitar when I was 10? Why weren’t my parents cool enough to buy me a bass guitar? Or a drum kit? 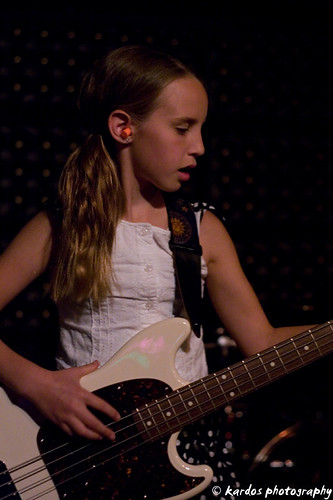 These kids are good. Yeah, maybe there are comparisons to Hanson, with the long blond hair and young ages. But these kids don’t write goddamn annoying songs. And that makes all the difference in the world to me.

During the set break, I got into a conversation with Paul, a photographer who was on assignment to shoot the Pipettes for the cover of Pollstar Magazine. I filled him in on the few details I knew of the Pipettes and Smoosh and some local bands that are making some noise, and we exchanged cards, so maybe something will come of it.

Then the Pipettes’ backing band took the stage, followed by the Pipettes themselves after a short drumroll. Some thoughts about the backing band first – I felt bad that they were forced to wear prep school sweater vests. At a sold-out Casbah show. With hardly any ventilation. Also, I noticed that all of them were short and not-so-very-attractive. I couldn’t help but wonder, was this on purpose so that none of them got involved with the girls in the band? But no matter, because they were damned tight. I was actually kind of in awe of them, and again felt bad, but this time because they were backing a gimmicky band.

Although the gimmick works, at least for now. I was kind of surprised at the burlesque-type outfits the girls were wearing, as they are a throwback to 60’s girl groups. But I guess that’s the “update” for the new millenium. Regardless, those polka dots just begged for a high contrast B&W shot. 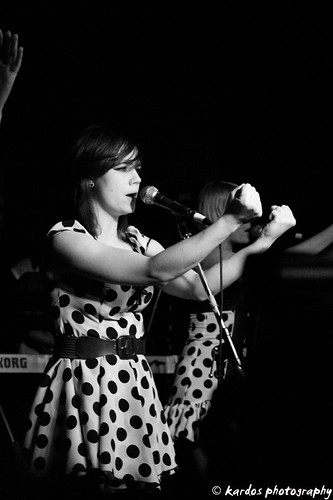 I was pretty happy with my spot in the crowd, because I managed to get a shot of all three of the girls together. 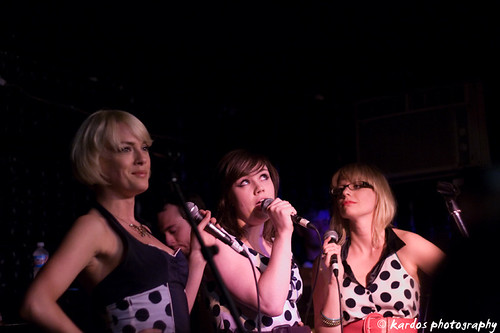 At this point I must add that I find it amusing how each girl seems to represent a specific “type.” From left to right in the above photo, there’s the blonde cheerleader, who seemed the most fake out of all three. Then there’s the girl-next-door brunette, who appeared to be having the most fun on stage. And finally, there was the smart blonde with glasses and tousled hair (yay!). Maybe these “types” aren’t as contrived as some girl groups, such as the Spice Girls (Scary Spice? I still say wtf.). But then again, there aren’t as many of them. It’s still a gimmick, but a gimmick that still works, I think, in part because they’re British. I can’t really explain that one any further, but somehow it makes it less…obnoxious? I dunno. I did feel like I could sit down and have a beer and a chat with any of these girls, so maybe that’s part of it.

They were nice enough to keep the lights bright, at one point even asking for the house lights to be turned on (unfortunately this didn’t happen). They engaged the crowd a lot, imploring people to dance and not just stand around trying to be cool, because “that’s a load of shit,” as the brunette put it. During “Your Kisses are Wasted on Me,” they even asked the audience members to raise their index finger in the air, in a sort-of “tsk, tsk” fashion. 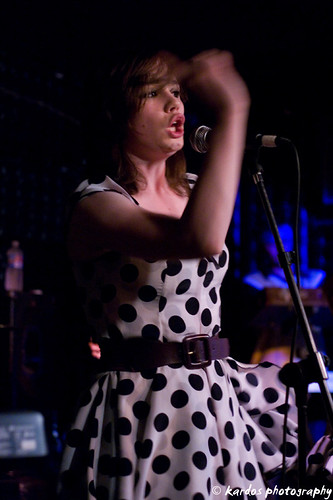 They seemed to be having a lot of fun on stage, as was the audience. I swear there was even some kind of “dance pit” in the middle of the room, consisting of mostly males. That was odd to see. All in all, it was a good show, even if the Pipettes weren’t engaging in any sort of thoughtful indie rock. Sometimes you just want to dance to some old-fashioned songs about boys. 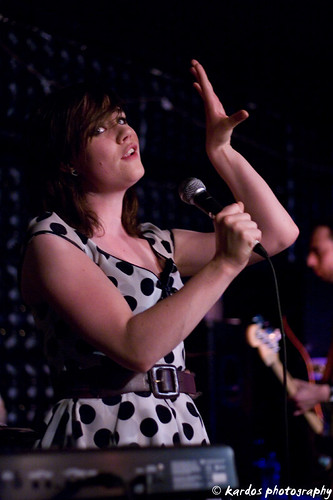 The rest of my photos are here.

Their album, which I somehow managed to snag almost a year ago on eMusic, officially comes out in the States in August.

I also took some shots on a very old Canon AE-1 film SLR camera because of two reasons: 1) 3200 ISO black and white film that I picked up on Saturday, and 2) wide angle lens. Unfortunately, those won’t be posted until a) I process the film (hopefully happening Wednesday or Thursday, but realistically more like next weekend), and b) borrow someone’s negative scanner. Wow, it’s funny how quickly you forget what patience is. At any rate, I’m intrigued to see the results. The wide angle lens actually allows me to capture most of the stage at the Casbah, even when standing right up against it, but unfortunately it doesn’t let as much light in as my 50mm lens on the digital SLR. Which is why I went with 3200 ISO film. Sadly, the light meter was pretty impossible to read in that dim of light, as was the focusing meter, so I’m crossing my fingers and hoping for the best.