Coming off of the amazing awesomeness of the previous night’s Mountain Goats show, I truthfully wasn’t expecting much from She & Him. I mean, I like M. Ward and all, and the one or two songs that I’d heard of his collaboration with Zooey Deschanel sounded promising, but I was kind of “meh” about the whole thing. Maybe because it was so hyped up by the blogosphere (and reading reviews the week following, it seems like a large number of those bloggers were actually in attendance). Or maybe because it involved someone famous for doing something other than singing, which oftentimes doesn’t end up so well.

The venue was packed when I got there, with a large line at will-call. I missed Emily Jane White and Adam Stephens (of Two Gallants), but I made it inside for Whispertown2000. They were cutsie, with two girls on vocals (one of them also playing guitar), but nothing all that ground breaking. Most of the crowd was just there killing time and jockeying for a spot to catch a glimpse of the headliners. I cut up around the edge of the crowd, and during set change, worked my way in towards the front, holding my camera in front of me so that hopefully people wouldn’t just think I was an asshole. I ended up making friends with a guy when I told him I was shooting for Pitchfork, and he was kind enough to let me stand in front of him and make conversation while waiting for the band to start.

Once She & Him took the stage, all eyes were on Zooey. She looked really nervous up there (strange to see an actress look nervous in front of a crowd of people), but M. Ward kept shooting reassuring glances her way, which was really sweet and touching to see. Her voice sounded incredible – she definitely has a unique tone and quirkiness. The songs were all pretty fetching, in a retro 60’s girl-pop way – cute lyrics about being in and falling out of love. 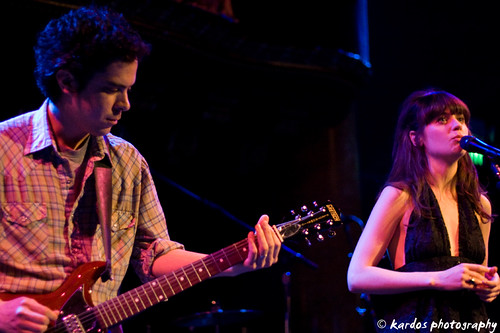 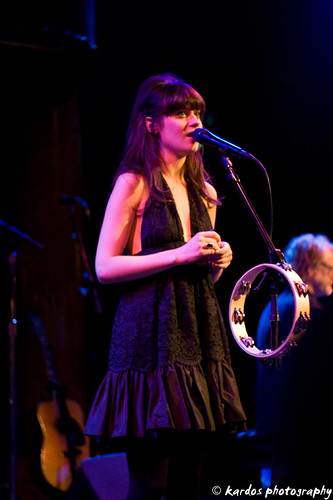 The backing band kept the music at the perfect level – never overpowering her vocals, always complementing them. But my favorite moments were when she dueted with M. Ward and when he backed her vocals. Their voices flowed together perfectly, and his guitar-work, while understated, was beautiful. 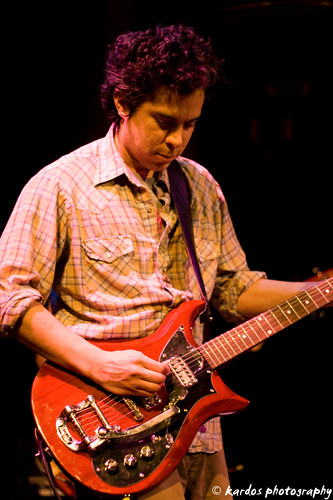 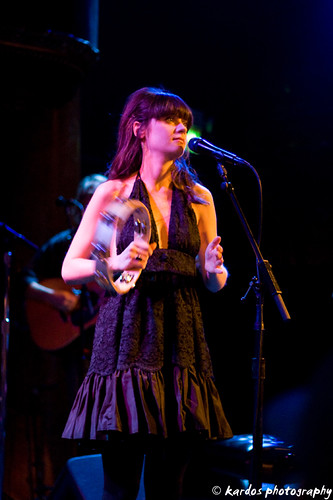 In the end, I was nicely surprised by how much I enjoyed their set, even though after my three-song limit I headed to the back of the crowd. It was great music to listen to and enjoy without needing to be completely engaged in it, and at that point in the weekend, it was exactly what I needed.