Again, I need to start writing these reviews much sooner than a week after the show.

I got to the Beauty Bar early that night, because I thought that the Beauty Bar had to end shows early (by 11PM) on weeknights. Apparently I was wrong though, because this one went until 11:30. No complaints here.

SayVinyl opened up the show, and with Jake on the soundboard, everything sounded great. I enjoyed their set much more than I thought I would. That’s not a slant against the band or anything I’d heard about them previously. It’s just that, for some crazy reason, I had the idea that they were an emo band. I couldn’t have been more wrong. They played pretty solid indie rock, maybe a little darker sounding than some bands, but incredibly enjoyable. Listening to them, I got the feeling that their drummer played in marching band in high school (again, not an insult – I was in marching band myself). He used a lot of snare drum and rim shots, more than I’ve noticed in most other bands. It definitely helped give the band a distinctive sound.

I didn’t take many photos that night – there are a grand total of three stage lights at the Beauty Bar. I had my flash on me, but I’m pretty lazy when it comes to using it at concerts. There’s usually not much to bounce it off of, and I hate using it directly and getting shadows on the wall behind people. So here’s the only one I have of SayVinyl: 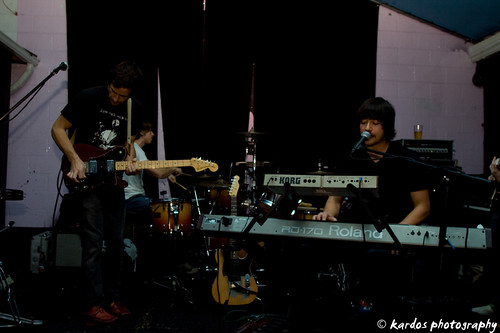 SayVinyl @ Beauty Bar, shot by Natalie Kardos
But that being said, I did take a video of one of their brand new songs. The sound quality isn’t great, but it is what it is:

Unfortunately, a lot of the crowd petered out before The Morning Benders took the stage. Their loss. This San Francisco band sounded great and played some strong indie pop. They even covered a Joy Division song for all the hipsters out there. There were several girls in the front who were rocking out, and one guy who was busting all kinds of dance moves. But I can’t blame them, because it’s pretty impossible to keep from bouncing around while listening to this brand of music. I had a great time, and I’m definitely glad I stuck around for the end of their set. I even picked up the EP of theirs, Boarded Doors, that I didn’t already have (I had found a copy of Loose Change at the Amoeba in LA a couple months ago, after reading about the band on Stereogum). 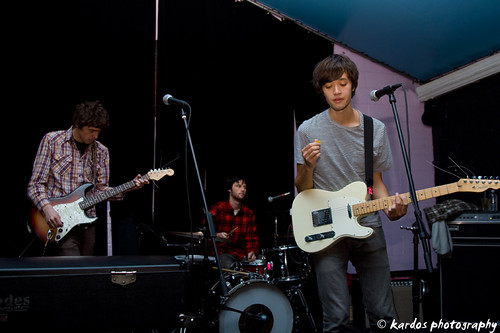 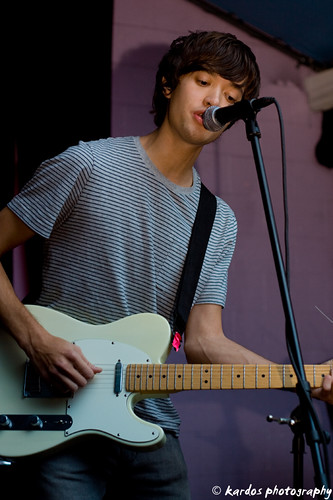 Again, not too many photos, but I took two videos, including their cover of “Celebration” (although the vocals are pretty low on that one).