Wow, I have a lot of catching up to do.

After coming down with some monster cold that is apparently terrorizing all of California this winter on the 25th, I spent the week pretty much in bed and hardly at all in work. I trekked in to feed the cells that I had growing, but that was about all I was up for. By Friday, I was feeling a lot better and probably could have worked a full day, but at that point there wasn’t a whole lot I could get accomplished.

My flight to San Francisco left that evening, and due to some low-lying fog around the Bay Area, it was late getting in to San Diego, and then had to sit on the runway for a bit as well. We touched down at SFO about an hour late, and I hopped on the BART (which is a clone of DC’s Metro system, which gave me a weird sense of deja vu) to get to J’s place. Which I finally did at about 11. She met me at the BART stop and we walked the few blocks to her place. At that point my cold was catching up with me and I was pretty much done for the night. So we just chatted for a bit, catching up since I hadn’t seen her in awhile, and then I passed out on the air mattress she nicely provided for me.

The next day, we walked all over town, doing some sight-seeing, and managed to take just about every form of public transportation in the city – trolley bus, cable car, regular bus, F train, and BART. I was supposed to meet up with Adrian at the Diesel happy hour where The Morning Benders were playing, but I felt the need to crash coming on so we bailed and went back to J’s place, where I proceeded to take a 2-hour nap.

After rousing myself, I headed to The Independence solo for the sold-out show. I arrived during Tulsa‘s set and maneuvered to the left side of the stage. There were already a bunch of people in the venue, and I sort of hate being the asshole who shoves themselves up front (especially when it’s my own fault that I didn’t get to the venue earlier), so I just worked my way in from the side whenever the crowd shifted. Tulsa sounded really good – a little like My Morning Jacket. Unfortunately, I could only manage to get photos of the singer from where I was. 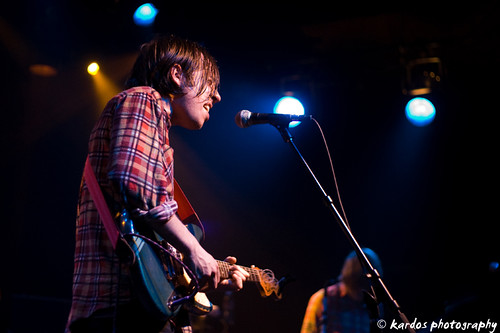 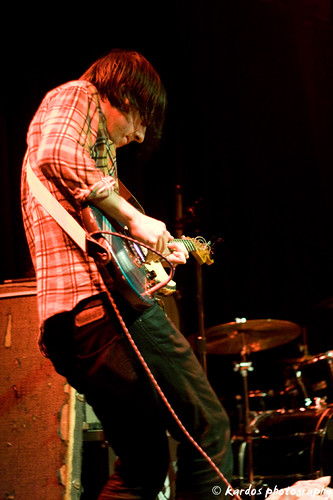 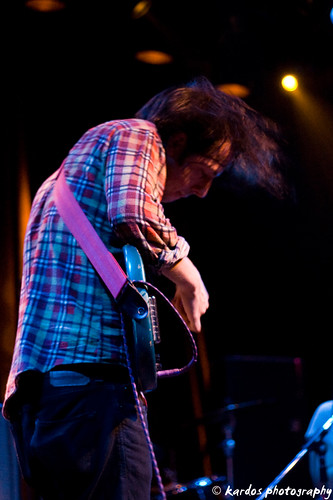 Did I mention that the lighting was positively gorgeous? I was drooling over it the entire night. Not only did they have lights on all four sides of the stage (!), but it was a dynamic setup as well. Probably the smallest venue we have in SD with lighting that good is the House of Blues. It was even better than the Belly Up, with about half to 3/4ths the capacity.

The next act up was David Dondero. A guy with an acoustic guitar. He kind of put me to sleep, although it could have just been the remnants of my earlier nap. At any rate, his set was pretty short, and the crowd was buzzing for the main act. 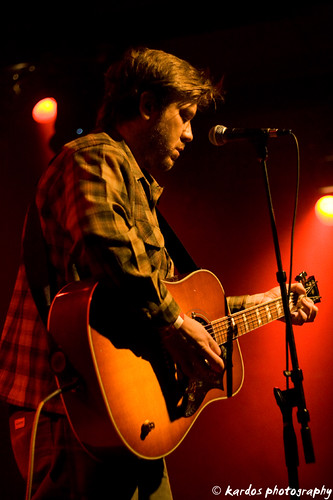 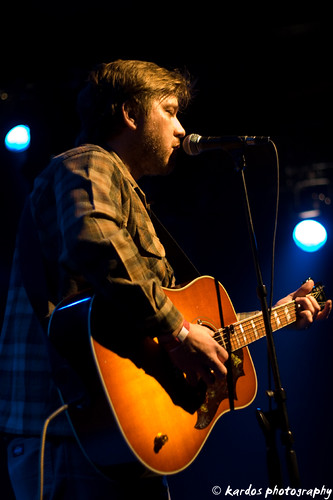 During the set change, I was pretty sure that I had picked the right side of the stage to stand on – the roadie replaced the microphone on the stand closest to me with one from backstage (a personal microphone, eh?), and set up a guitar stand holding an acoustic guitar next to it. Hey, when you’re a photographer AND a scientist, you learn to pay attention to the details…

After a short wait, John Darnielle, drummer Jon Wurster, and bassist Peter Hughes took the stage to much applause. It quickly became evident that Darnielle was absolutely thrilled to be there – I’ve rarely seen a performer have such a huge grin on his face during most of the show. The sound, lighting, and entire atmosphere of the place was perfect – the rapt audience singing along to all the songs and soaking up every syllable of Darnielle’s stage banter. 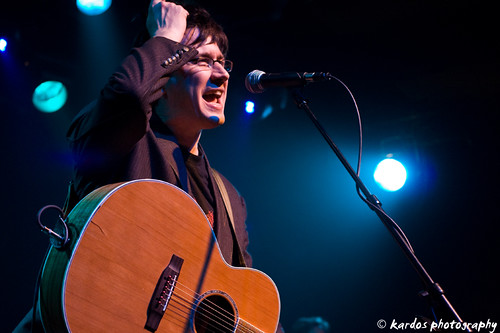 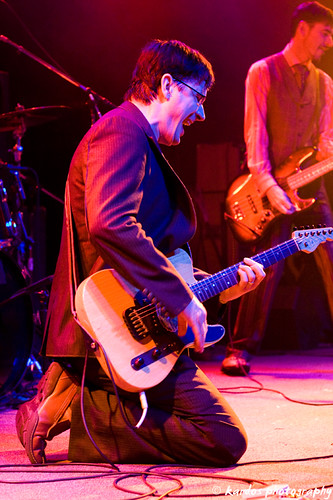 The setlist ran the gamut of old to new, naturally giving a lot of space and time to songs off their newest release, Heretic Pride. If you haven’t heard from the 8 billion rave reviews, the album is GOOD. The songs from that album that they chose to render live that night included “Heretic Pride,” “Autoclave,” “So Desperate,” “In the Craters of the Moon,” “Lovecraft in Brooklyn,” “Sept 15th 1983,” and “Michael Myers Resplendent.” They opened with the latter, and it always makes me feel a little strange taking photos of a band that’s playing a song about being in the spotlight (see also Lupe Fiasco’s “Superstar” and Spoon’s “I Turn My Camera On”), but it was obvious that John didn’t harbor any ill will. In fact, several times he looked right at me and almost seemed to be posing for my shots. 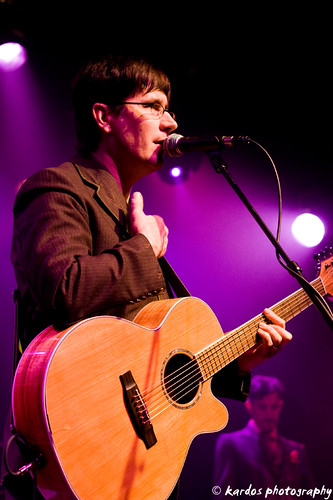 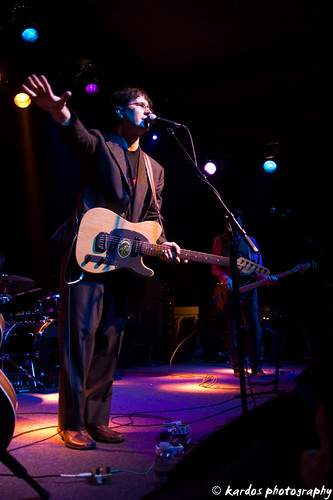 “Heretic Pride” was an especially good number, with the entire crowd singing the strangely triumphant chorus. And “Autoclave”? Well, fuck, I’m a scientist, how can I not like a song that references a piece of machinery used to sterilize almost everything I use for my job? “Lovecraft in Brooklyn” was dark, moody, and rocked the hell out of the place. 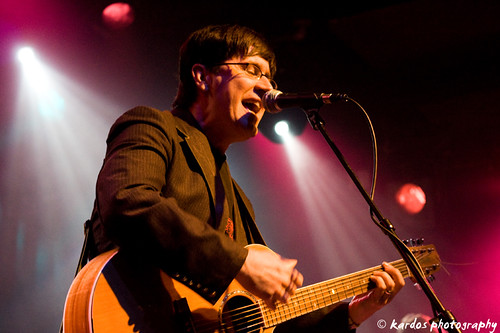 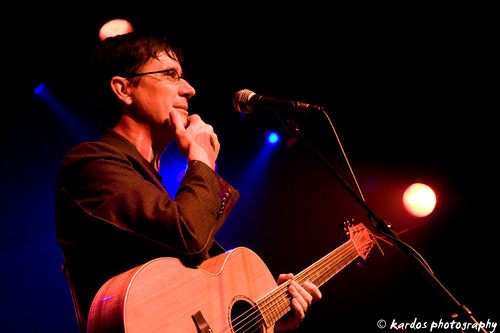 As for older material, they touched upon Get Lonely (“Wild Sage”) and The Sunset Tree (a slower, softer version of “Dance Music” and “Hast Thou Considered the Tetrapod”), and a whole bunch of songs from their extensive back catalog that I can’t even begin to name, although I did happen to pick up on “No Children” from Tallahassee. This included not one, but TWO encores (although the crowd the next day at Bottom of the Hill got THREE). It was a pretty special set, magical even, and no doubt will go down as one of the best concerts I see this year. I’m pretty sure I’ll be digging further into that back catalog in the weeks and months to come, as well as dusting off The Sunset Tree and Get Lonely…

For a free and legal download of their set the next day at Bottom of the Hill, head here.