I must have arrived at the Casbah at the same time last night as I did on Monday, because the same train/trolley was whizzing past, blocking traffic again. Only difference was, last night the bands hadn’t started playing yet.

I found my way inside (thanks for the ticket, Chuck!) and to the back bar, where I conversed with Chuck and the bartender for a little while as we watched some pop culture game show on VH1. It reminded me that I haven’t watched TV in a loooong time. Not a bad thing.

Ran into some of the Muslims and crew as well, but shortly after that, The Roman Spring started playing. We headed inside to check them out, as I had heard good things about them previously.

Their music was solid alt-rocky stuff, and it kept me interested to a degree, but they need something to really grab your attention. I generally agree with CatDirt – someone in the band needs to have a certain amount of stage presence to really draw the crowd in. It doesn’t necessarily have to be the singer, but it’s usually easier for them as they are already at the forefront of the band. 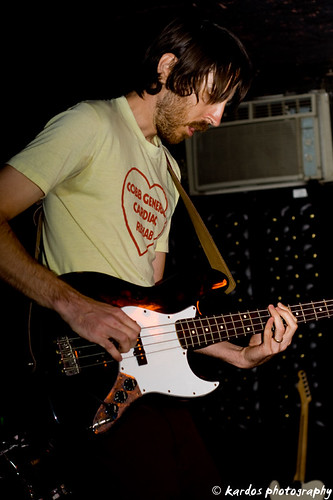 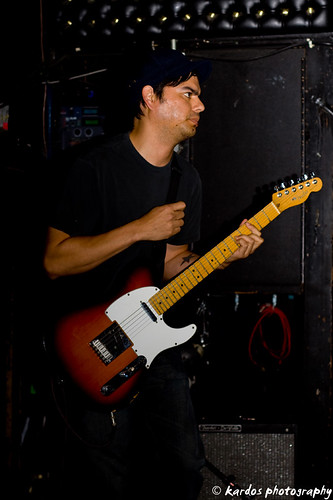 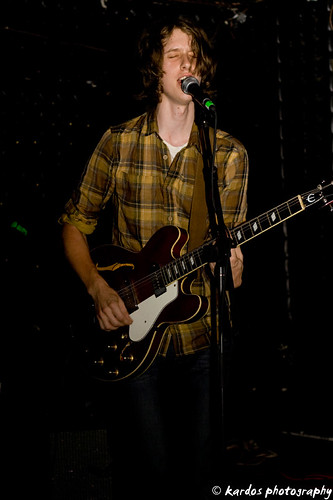 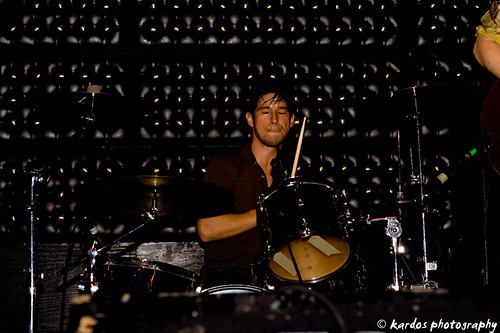 The singer’s voice is somewhere between the singers from Hot Hot Heat (wow I haven’t thought of this band in ages) and Muse, or at least that’s what immediately sprang to mind. So he can definitely use it to his advantage – he just has to work on the stage presence thing a bit.

And hey, that’s a nice segue into talking about The Vultures‘ set. Chuck Rowland, lead singer of The Vultures, has stage presence oozing out of his ears. Say what you want about his attitude on stage – at least he has one. Sadly, it appears that he toned down the attitude last night, after hearing complaints about the spitting, etc. Fuck it, Chuck – you’re fronting a glammy punk band – spit all you want! If you’ve ever spoken a sentence to Chuck, you know he’s far too nice of a guy to spit on people. No need for a 10 foot radius around the stage. I was actually hoping he’d spit a bit more onstage so I could get a good photo of it, but no luck. I also placed my jacket on the stage in front of him for part of the set, giving him the opportunity to kick it off again, but he didn’t take the bait. Again, I say – to hell with the haters. The attitude is part of the show, so keep it up.

The rest of the band is incredibly tight, but one has to look past Chuck’s stage presence to notice it. Which sounds like a bad thing, but it isn’t. It’s a smart/mature band that hides in the background to let their charismatic frontman do his thing. If he’s got it, roll with it. It’s especially cool to see Chuck do his thing in this band, and then be that background bassist in The Prayers. Versatility, anyone? (This post is starting to make me sound like a Chuck Rowland groupie – I’d better stop now.) 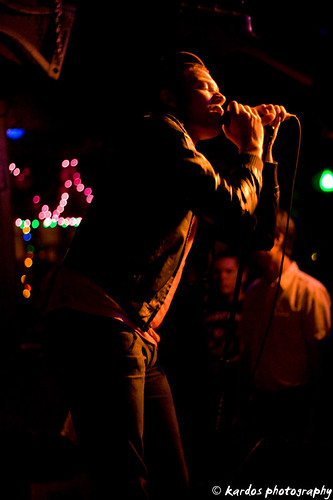 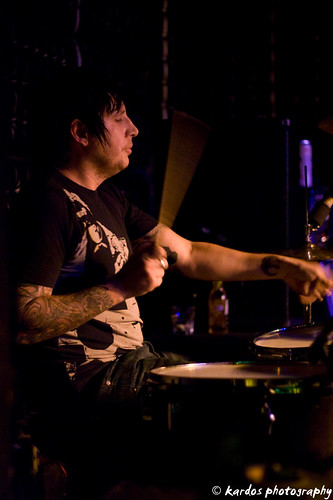 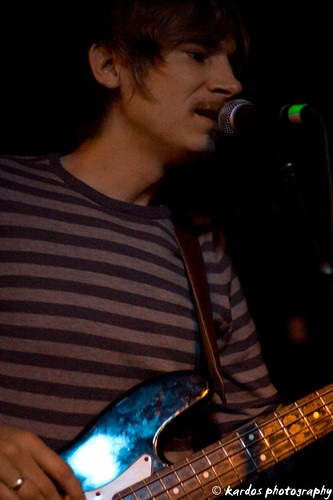 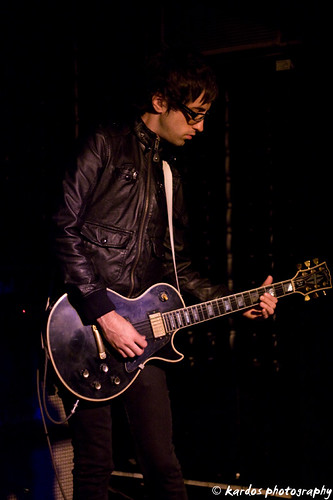 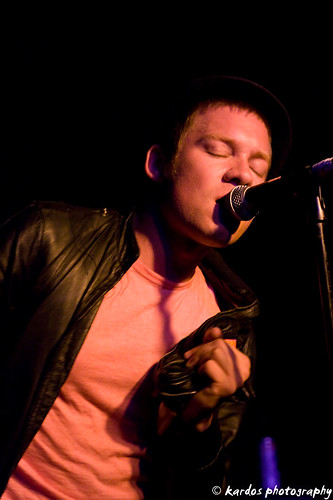 The only local band that could have followed up The Vultures’ intense set last night was The Muslims (speaking of which, did The Vultures cover a Muslim’s song in their set? I think I heard one, but I could be very, very wrong). This is the third time I’ve seen them, and I’m more and more impressed every time. Their rhythm section is so on all the time – I love that Emily plays bass with a pick. Her and Matty (lead guitar) pour everything they have into their too-short sets. She stomps and jumps around, while he plays guitar with fierce concentration. The drummer is no joke either. All the bouncy bass and guitar lines work well with Matt’s vocals, which are sort of…Dylan-esque, but a little deeper and a little more melodic? I hope I don’t get shot for saying that. No Velvet Underground references, at least…

According to Matty, they “need to write some more fucking songs,” and I can’t wait until they do. The stuff they’ve played so far is damn catchy – catchy enough to have it stuck in my head after only hearing it a few times. 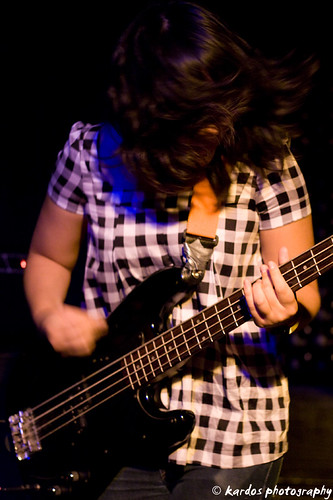 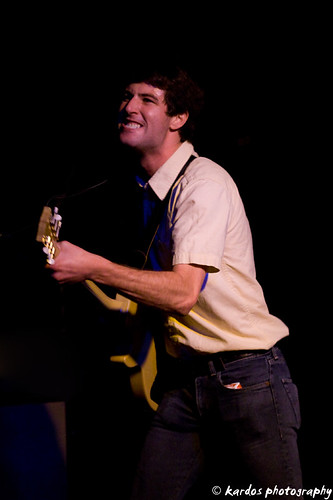 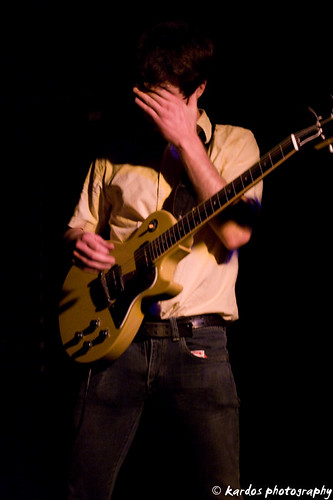 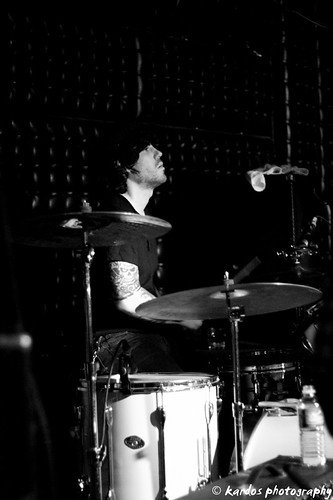 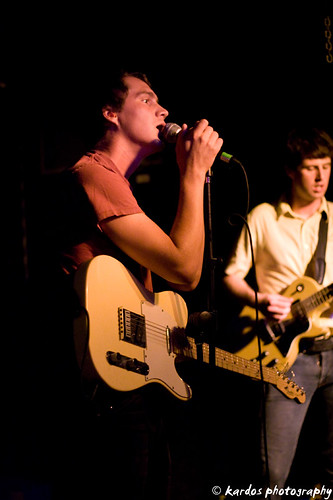 All three bands had relatively short sets, but I made the “mistake” of hanging around for awhile afterwards – a mistake I only realized when I tried to get up at 6:30AM this morning. Ended up sleeping until 8, but hey, that’s one of the perks of grad school – I work the hours I want to. And in the grand scheme of getting my PhD, what’s a few hours going to do?

One last note – I love the Skull Kontrol DJs and the motown-y songs they spin between sets. I could have used a little less volume, but that’s pretty much always the case at the Casbah. That’s why there’s the smoking patio and the back bar if you want to have a conversation, I guess.