Finally, I feel as though I’ve gathered my thoughts enough to write this review. Excuse me if it sounds like I’m gushing at any point, but you have to understand – The National is my Arcade Fire, my Radiohead, my Smiths, my Cure.

As such, I skipped out on seeing Girl Talk at the Epicenter in order to get to the Casbah early enough to secure a spot front and center – almost exactly where I was for their show last year. That show pushed me over the edge dividing loving Alligator and naming it as one of my favorite albums of all time. I hoped that this time would be no different for Boxer, but along with that hope came the dread that I was overly anticipating this show – that it would turn out to be another Arcade Fire at the Hollywood Bowl, or any number of shows I’ve seen this year that merely aped the band’s album, instead of expanding on it.

The opener for their show was St. Vincent, a “band” that I’ve heard much about but had yet to see for myself. I already had an appreciation for Annie Clark, based solely on the fact that her album Marry Me was named after an Arrested Development catchphrase/joke. I don’t have any photos from her set because the only lighting was coming from an epilepsy-inducing flickering light on stage that vaguely resembled the shape of an Absolut vodka bottle. Due to this light, I spent most of her set staring at the foot of the stage, which was perhaps its purpose – because there was an amazing amount of pedal work going on down there. At one point, Annie chuckled at the audience and remarked, “Welcome to the experimental circus.” Indeed. I was almost as impressed as I was when I saw Andrew Bird at the Hollywood Bowl – the one thing that made Andrew Bird better was the live looping that he was doing, while Annie was using mostly prerecorded sounds that she triggered with her pedals. But even so, her guitar work and voice were incredible.

She played a somewhat brief set, and since The National’s gear was mostly set up on stage around her, there wasn’t a whole lot of time in between sets. During St. Vincent’s set, a lot of people trickled in, and since I didn’t want to give up the best spot in the house, I ended up front and center way before her set was over. It was this position that scored me two drink tickets from Matt Berninger when he walked onstage, as well as a front row view of his antics and the intensity that is The National.

I can honestly say that from the first note of “Start a War,” I was literally shaking. I had been waiting for this show from the second their last show here ended, even before they canceled their gig here in June. There were moments when I was snapping photos (which I wasn’t even sure I wanted to do, in case it distracted myself or anyone else from the music), moments when I was listening introvertedly with my head down and eyes closed, moments when I was yelling lyrics right alongside with Berninger, and moments when I was half a millimeter away from breaking into tears. 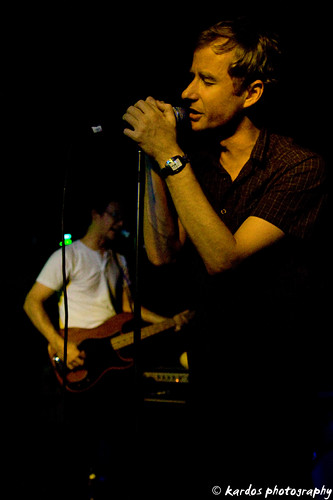 The only complaint I could ever have about the show is that they didn’t play “Geese of Beverly Road,” my favorite song from their previous show. As far as “oldies” went, they touched upon many from Alligator (“Secret Meeting,” “Baby We’ll Be Fine,” “Abel,” “All The Wine,” “Daughters of the Soho Riots,” and the blistering set closer of “Mr. November”) and one from their Cherry Tree EP (the stunningly beautiful “About Today”), but nothing from their two full-lengths prior to Alligator. Well, except for “29 Years,” which found its way into the coda of “Slow Show” on Boxer. The rest of their set focused on songs off of Boxer, and despite initially feeling that Alligator is a superior album, this show made Boxer click for me. 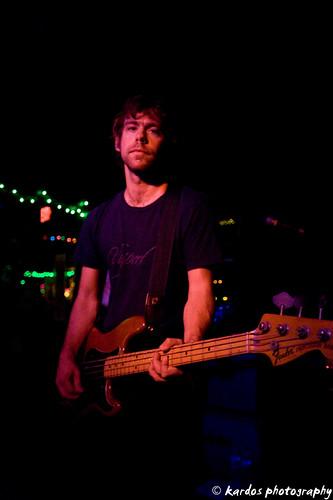 All the songs were played with a higher level of intensity than their recorded form, which has the effect of making the songs more intense for me when I listen to them now, post-concert. The guitar lines intertwine masterfully, Berninger’s voice sings beautiful lyrics in a beautiful baritone, Padma Newsome plays to death whatever instrument is put in front of him, and Bryan Devendorf’s drumming is the glue that holds it all together. It’s the sort of music that seems delicate, that one misstep could bring it all crashing in on itself. But that misstep never comes, and the bridled chaos of it all hits you over and over again until you can’t help but hear every nuance in every song every time you listen to them. 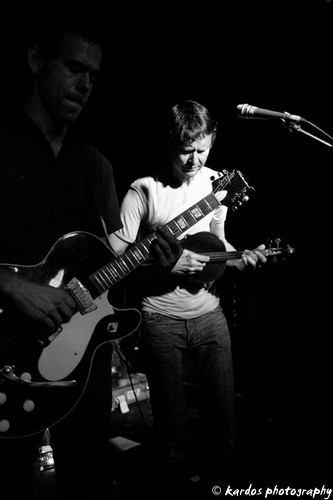 And this is why I love this band. They support great albums with even more spectacular live shows. I will never hear the songs on Boxer the same way again, especially not “Slow Show,” or “Apartment Story.” The chorus of the latter song (“So worry not/all things are well/we’ll be alright/we have our looks and perfume on”) felt incredibly uplifting. And “About Today,” was, well, just as awesome as the first time I heard it at their last show here. Ending the show with “Mr. November” was as cathartic as it was last time, although probably more so for Mr. Berninger, who ended up careening around the stage, ramming the mic stand into the ceiling and finally breaking it into three pieces. Incredible. 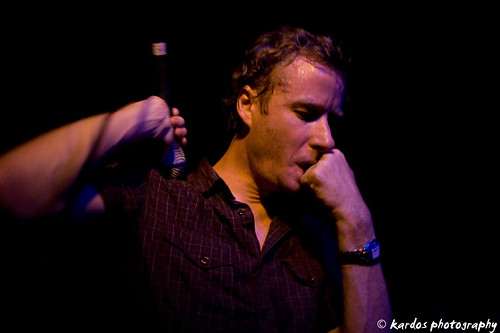 Berninger has definitely come into his own as a frontman. Last time around, he barely interacted with the audience and he seemed fairly awkward with all those eyes on him. This time, with even more eyes focused in his direction, he took it all in stride. That, and the huge tour bus outside the Casbah, were the only discernible differences between this version of the band and the one I saw last year. I’m happy to see them finally getting the recognition they deserve, even if it does mean I’ll have to see them in a bigger venue next time around. But no matter – I get the feeling that no matter how much open space is between me and this band at a show, I will always walk away feeling as emotionally raw and ripped to pieces as I did the first time I saw them. And yes, that is a good thing. When you see over 100 shows a year, it’s nice to know bands still exist that can shake you to your very core. 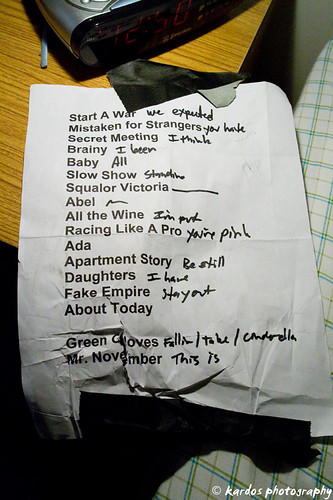