Warning – this post will have a lot of photos. That’s what happens when you have a lineup of four bands…

By last Friday I was pretty much dead to the world. That night was my fourth show in six days, and my two “off nights” involved hanging out with friends and not exactly relaxing. Combine that with work days topping out at over 10 hours each day, and you get a recipe for antisocial Natalie. But since the Che Cafe is on campus anyway, it was the easiest choice for a Friday night that didn’t involve just going home and passing out.

So I walked the 100 or so yards to Porter’s Pub, had a few beers and hung out to kill some time (thanks Tim for the heads up that even if a show was listed at 7:30, it probably wouldn’t be starting until closer to 10). We still ended up there early (showed up around 8:45 or so), and because I had only been to the Che Cafe once before, we managed to walk in the wrong door, and thus bypass the line. Oops. No matter because we were on the list anyway. I ended up chatting with Charles “I don’t spit on people” Rowland of The Vultures (and also bassist of The Prayers) and Brandon Welchez of The Prayers until showtime.

Silverbird was up first, and they were pretty good. A little twangy, with some slide guitar and keys in the mix. It seemed like the drummer and keyboardist may have had some jazzy background, because before their set started, they were playing a little jazz riff for sound check. I also kind of picked up on some jazz tendencies in a few of the keyboard solos. But other than that, the band was straight alt-country – think the Old 97’s. They were pretty solid too, although the beginnings and endings of their songs were a little rough. Maybe they just need to play more live shows? 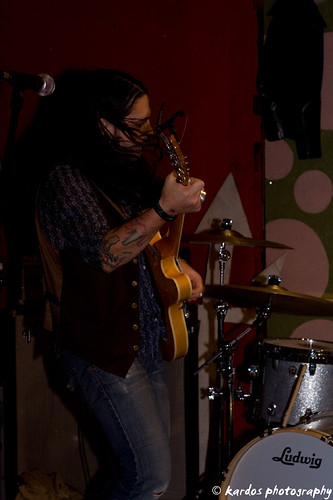 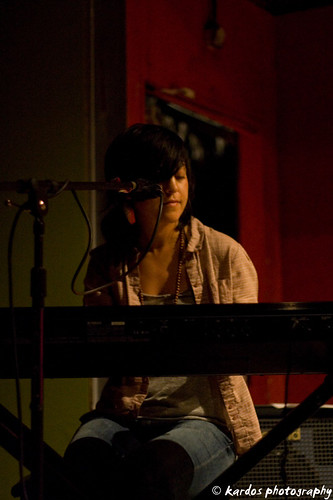 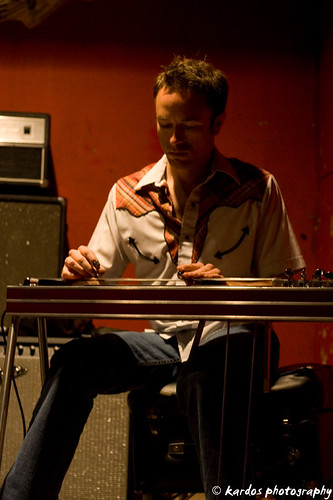 Next up was Swim Party, who brought their own lighting setup with them. Neat! I had heard a lot about them previously, but never actually got the chance to see them live. I was definitely glad I caught them. Now I believe all the hype surrounding them – they played a really great set and had really good energy. Bassist Alex also had a pretty inventive way of playing his bass guitar – sometimes strumming, sometimes hammering down on strings as opposed to just picking them. 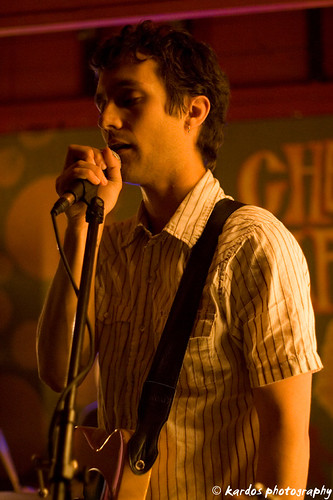 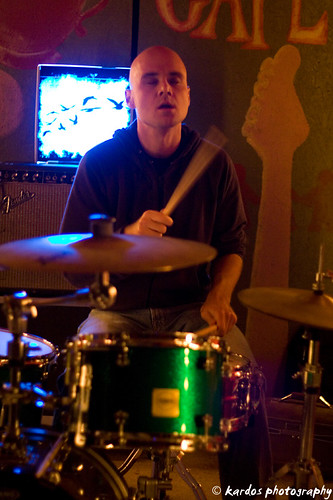 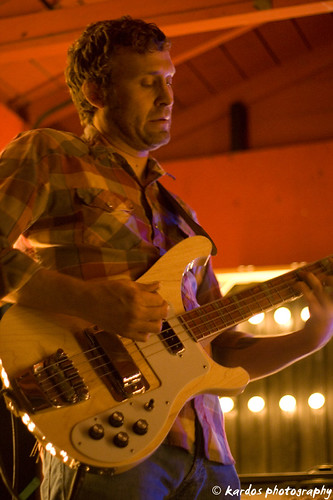 Following Swim Party was The Vision of a Dying World. I wasn’t really sure what to expect from their name, but they had the harmonies of folk music, the drumbeat of fast-paced country rock, and the attitude of punks. And did I mention that Jackson was wearing a black wifebeater? HOT! 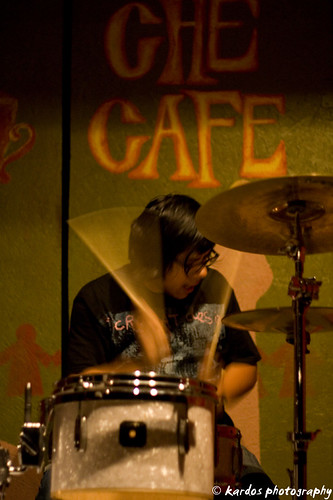 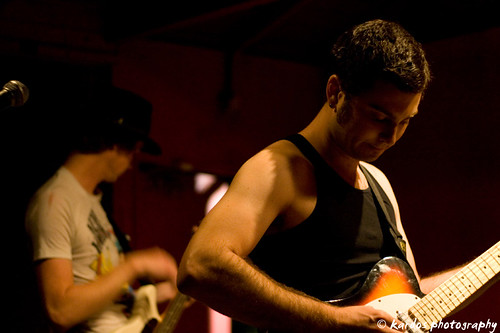 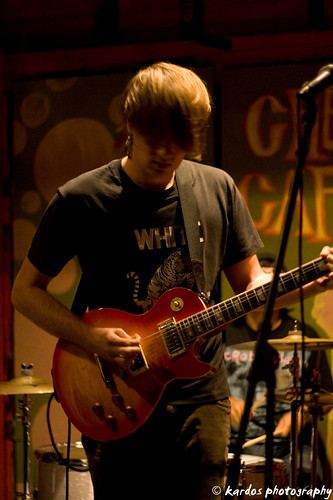 Finally, the reason for the evening – The Prayers, who were celebrating their EP release, finished off the evening with an incredible set. Frontman Brandon Welchez definitely has “it” – that charisma that grabs the crowd’s attention and keeps it on his band for the entirety of the show. I can definitely see these kids going places, with their Brit-rock influences and haircuts. It was also cool to see Charles of The Vultures onstage with them, playing bass and putting on a completely different persona from the one he uses in The Vultures. Arrogant punk rock frontman to shadow-swathed bassist with mystique in 3 days. At any rate, the kids stuck around until the end of the show, and the ones up front were definitely getting into the show. I can’t wait to see these guys play agian, although they don’t have any San Diego dates listed on their Myspace page currently… 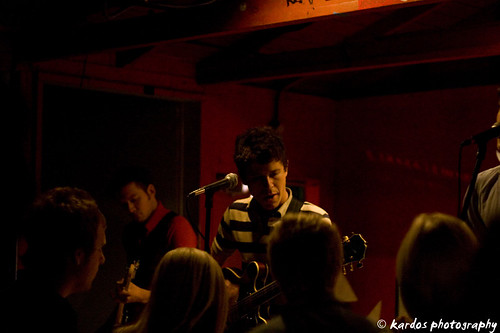 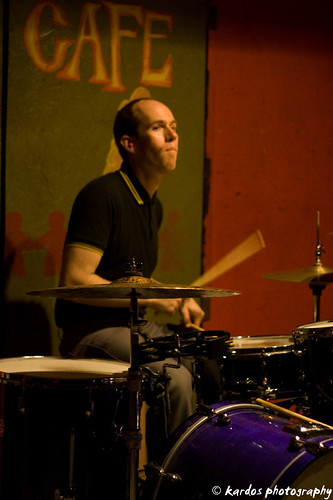 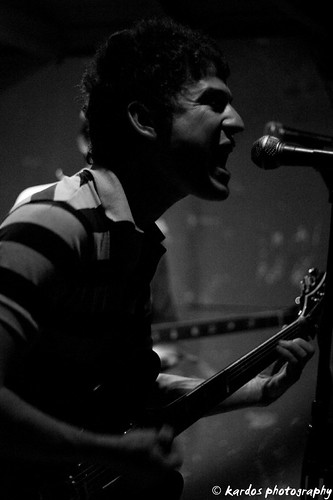 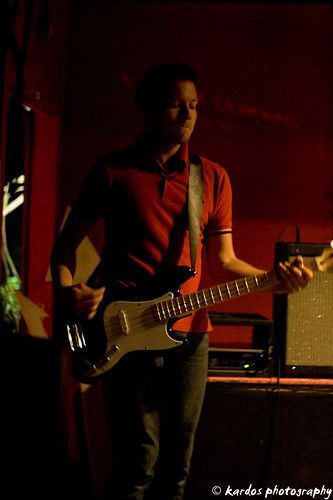 How is it that I always manage to walk out of these gigs without picking up CDs? Idiot! At any rate, after the show it was back to lab to pick up my stuff (I’m worthless without my laptop), then home to crash. For two days straight. You heard me. Didn’t go out Saturday or Sunday, due to trying to get things done around the house. As a result, I now have a working darkroom in my house and I even managed to develop 3 rolls of film and scan most of it into my computer. I’ll try and post some of those in a little while, but for now it’s back to the day job and stuff.