On Thursday night, I finally decided to get myself downtown to check out the Thursday Night Thing at the Museum of Contemporary Art. It’s a free event with a $3 “suggested” donation, which I paid, and then relied on my friend’s wallet for drinks (he was quite the enabler that night, as he also drove).

The two bands previously announced to be playing were The Brisbanes (from Kansas City) and The Prayers, but it seems that another band, Long Live Logos, was added at the last minute – maybe due to the appropriate name? They were playing when we arrived shortly after 7, but aside from checking them out briefly from the balcony, we didn’t pay much attention because we were checking out the art. 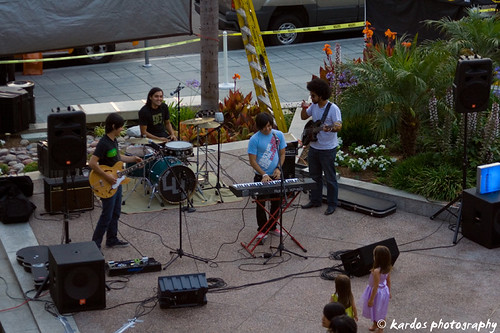 The theme of the night was Graphic Identity, featuring work by Ryan McGuinness. I thought one of the coolest displays was a turntable with two needles playing a Thelonius Monk record. The needles were spaced a bit apart, and it was interesting to hear the combined sound it made.

Outside was a display of logos created by Don Hollis and Dylan Jones of the design company Subtext, which were really neat to look at. 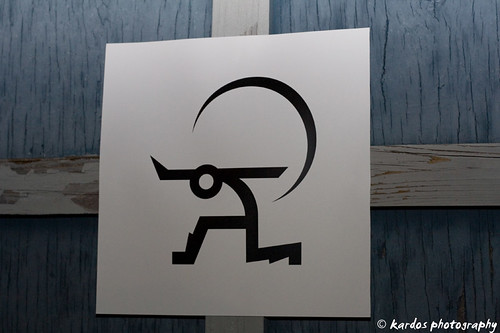 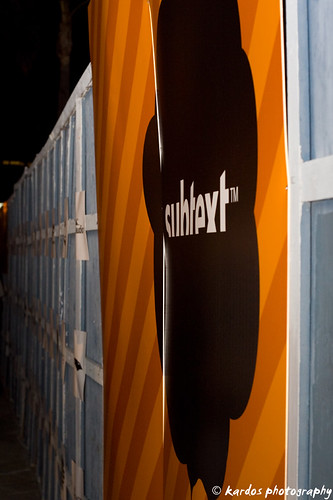 Also interesting to see were the buildings downtown as the night fell. I don’t really get to that part of town much, so it was nice to have an excuse to take some architecture photos. 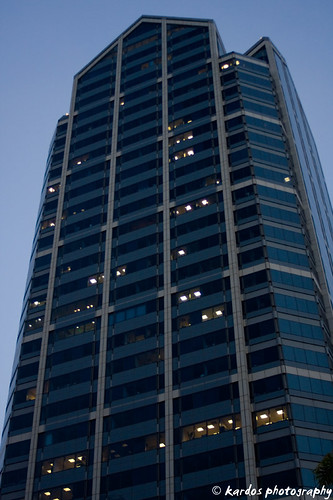 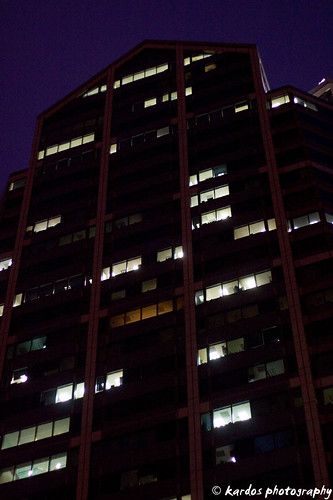 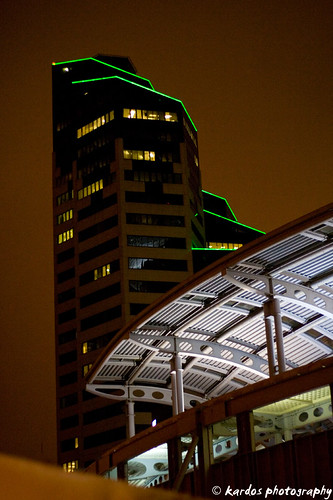 We finished looking at the art, and I finished my first cocktail of the evening, around the time that The Brisbanes started playing. They sounded good, somewhat alt-rocky, but with a bit of surf/reggae guitar thrown in. Also, their bass player looked like someone’s uncle that they let in the band. He was definitely a bit of a showman, moving all over the patio while playing. By this time of the evening, a decent crowd had appeared, with the balcony offering a nice vantage point. 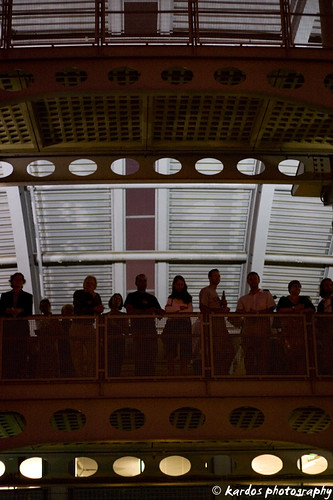 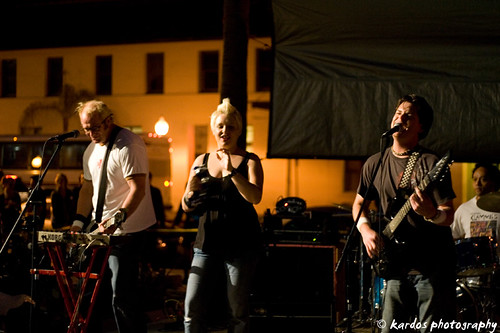 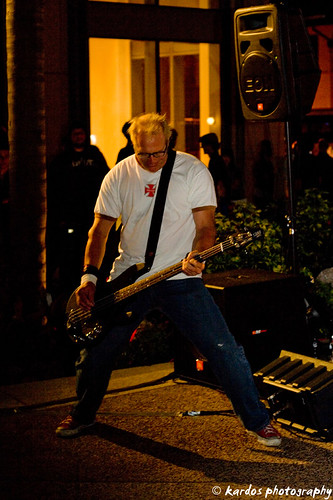 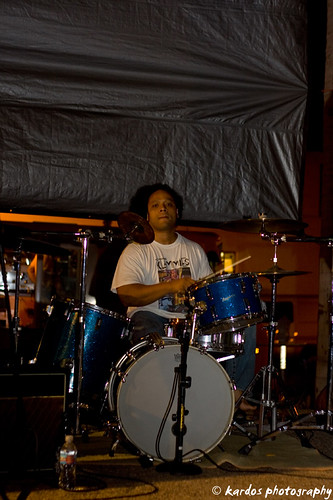 After their set, my ride graciously procured me another cocktail while I caught up with Rosey and Andrea. Shortly thereafter, The Prayers started their set. I really liked them when I saw them play at the Che Cafe a few weeks ago, and I liked them even more this time around. The crowd seemed maybe a little more into it, or maybe I was just a little more comfortable since it was a lot less scenester-y. Some folks from other bands showed up to support them as well – Matt from Vinyl Radio and Kristin from Grand Ole Party were both in the crowd.

Did I mention that these guys write super-catchy, perfectly Brit-poppy songs? My favorite at the moment is “Loose Lips,” with its refrain of “I hear some people talking about me/They’ve got tongues like razor blades/They don’t think twice about fucking up your life.” It sounds a lot less tramatic when sung with harmony. Catch them if you can… 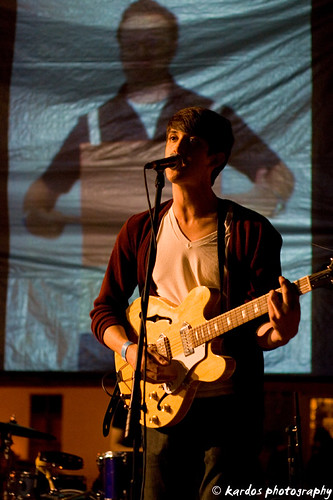 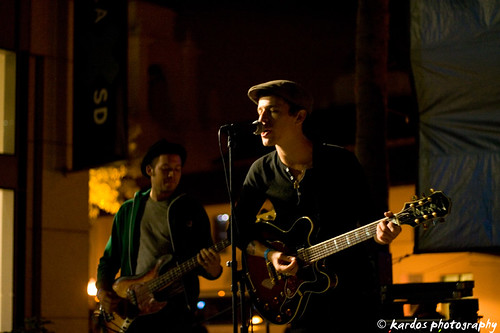 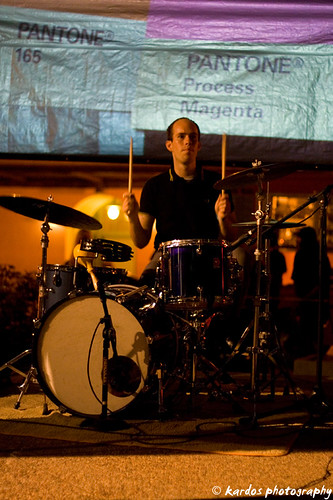 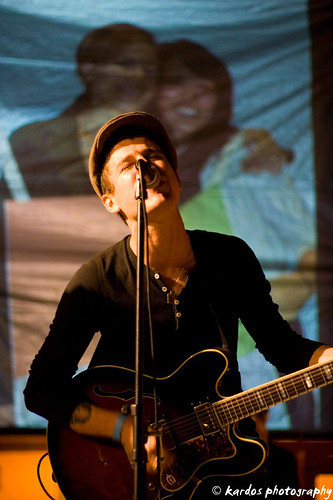 While the bands played, photos of people holding Pantone color charts were projected behind them. The final one that I saw go up after The Prayers played was, of course, Andrea. 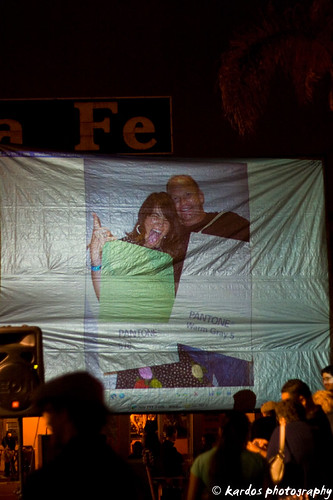 At least now I can’t be blamed for taking the actual photo.

Afterwards, Rosey and Andrea headed to the Bluefoot Bar. Since it’s conveniently located a few blocks from my apartment, I met them there, and Pete decided to come out too. Conversations there consisted of a lot less business and a lot more, ummm, girl talk. I somehow had forgotten about how strong they pour drinks at that bar, and two Captain and Cokes later, handed over my car keys to Pete. After safely making it back to my place with his bike in my car, he made quite possibly the best grilled cheese ever – not even the fact that my cell phone went swimming kept me from enjoying it.

I somehow made it to work at 8:30 the next morning. It was an amazingly fun night, and to top it all off, after four days of drying out, my cell phone appears to be working fine (one of the buttons is a little less responsive, but I can deal until November, when I get a free upgrade). Unfortunately, it did leave me a little wiped out for Friday night’s events…