Last Thursday night at the Beauty Bar was an interesting one. Tokyo Police Club generated a lot of blogger buzz with their EP A Lesson in Crime last year, but have yet to release a followup to that disc. I was wondering whether or not the show would sell out – if a lot of people would be curious to see this band of young’uns and their ADD-pop songs, or if maybe all the buzz had passed them by. As for Dappled Cities, I had become a quick fan of their album Granddance since picking it up at M-Theory a few weeks ago, but I wasn’t sure how many other people had the Aussie indie-rockers on their radar.

But judging by the line that was forming outside the Beauty Bar by 9:00, plenty of people were curious about one or the other of these bands. Rosey and I had planned on getting there early to talk to Dappled Cities (thanks to their tour manager, Al, for the tickets and for getting us sorted out), but due to a late arrival from LA (Comic Con traffic?), the bands were soundchecking until about 9:15. At which point, the bouncer came out and told everyone to form a separate line – right behind where Pete, Rosey, Andrea et al, and myself were standing.

So we were the first people in the bar and took that opportunity to get drinks and then headed back to talk to Dappled Cities. All the guys were extremely nice (they all signed a poster for me), and extremely supportive of the “blog movement.” Apparently there aren’t too many music blogs in Australia, and most Aussies end up reading overseas blogs to get their information. It was at that point where I quipped, “Well then, we know where to move when the US gets overrun with bloggers.” 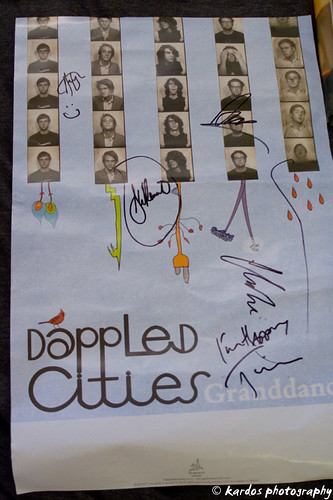 As soon as the guys started playing, they had my rapt attention. I have really been digging Granddance lately, and seeing the songs performed live gave me a whole new respect for the guys as musicians. The songs were culled mostly from that album (technically their sophomore release, but their debut release outside Australia), with “The Birds” off of the Dead Bodies Where Their Mouths Were EP and “Peach” off of their first album A Smile. Can we get that previous album released in the states sometime? I would quite like to hear it… 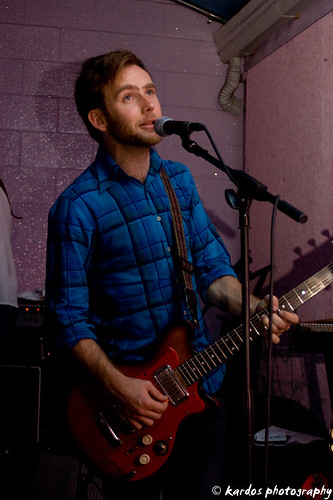 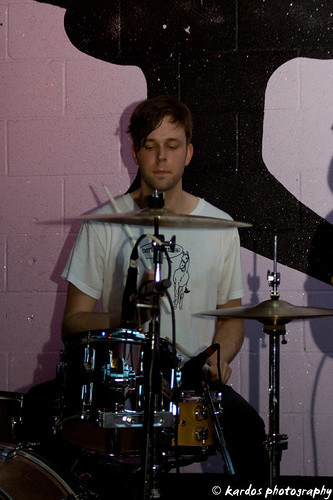 As I said, the guys put on a great show, and the intimacy of the venue was revealed in a humorous way. At the end of “Holy Chord,” Tim (vocals/guitar/keys, kickass falsetto) started to sing the line, “What does it mean to take off all our clothes and look into your eyes and say I mean it?” However, he looked over at our group standing there, all eyes on him, and couldn’t get past “take off all our clothes” before starting to laugh. He tried a “do-over” at the audience’s request, but still couldn’t nail it, so to speak. Afterwards, he grinned and said, “Well, that was really sincere, wasn’t it?” No matter, the song was still poignant and meaningful to me. 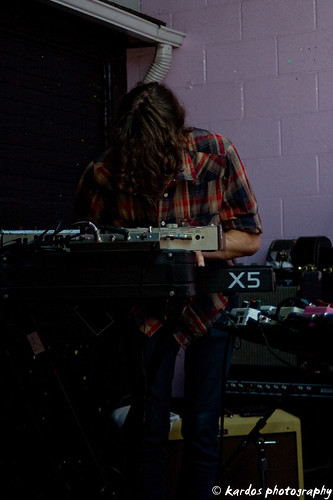 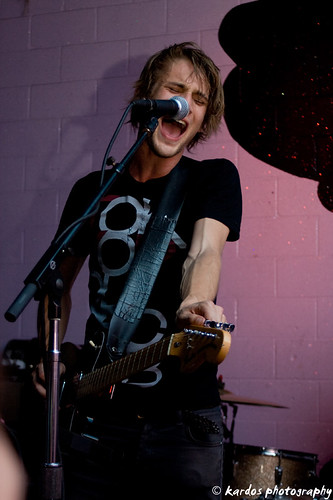 The only problem I had with their set was that it was too short, but it’s not the Beauty Bar’s fault that their shows have to end by 11PM on weeknights. For the short time that Dappled Cities was playing, they managed to attract pretty much everyone in the bar over to the stage area, and even get some folks dancing. 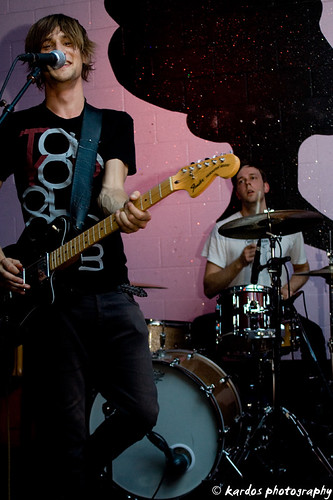 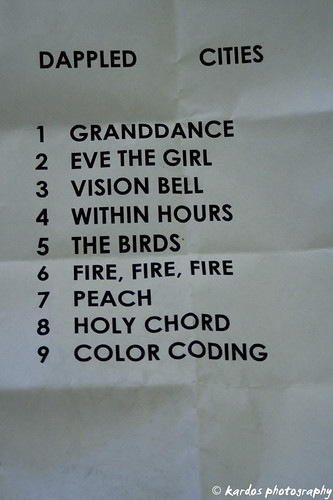 In between the two sets, the crowd actually grew, as opposed to the usual thinning-out as people go to get drinks, etc. A lot of people really wanted to see Tokyo Police Club, and I don’t blame them. I managed to maintain my front-line position, even though it took a bit of firm standing. At this point, it was steaming hot inside the bar, even though we were actually standing on the open-air patio. It didn’t help that it was humid and warm outside as well. My camera strap, which was actually around my neck for once (that’s how packed it was) was sticking to me the sweat around my collarbone (attractive, I know). But once Tokyo Police Club came onstage, none of that mattered.

I already mentioned that these kids (and yes, they are quite young) play music for the ADD-generation. Their songs are all between 1.5 and 3 minutes long, with their 7-song EP adding up to a mere 16.3 minutes. They’ve been faulted for this by others, but I for one won’t say anything bad about it. When your songs contain that much energy, it’s dangerous to let them carry on any longer. Especially when they’re being played live. 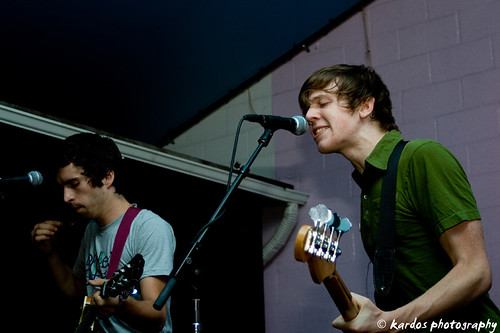 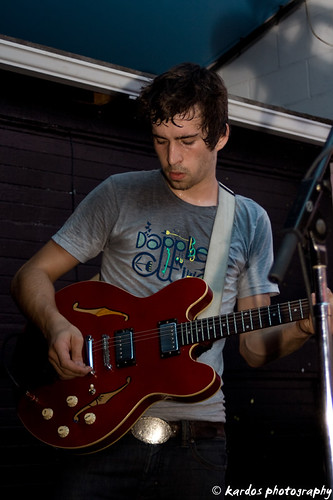 All the band members threw so much energy into their set – it was amazing to behold. They all jittered around the stage (especially the guy on keys/tambourine), occasionally screaming the lyrics in unison in a way that reminded me somewhat of the Arcade Fire. Bits of songs off of their EP remind me of Spoon (“Nature of the Experiment”) or Death Cab for Cutie (the intro and verses of “Citizens of Tomorrow”). 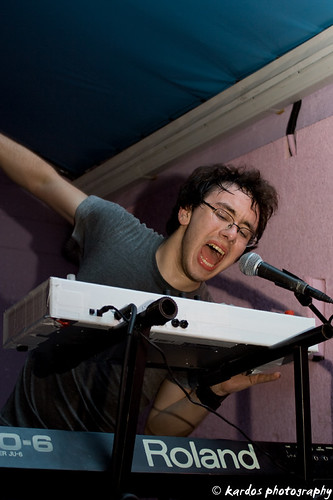 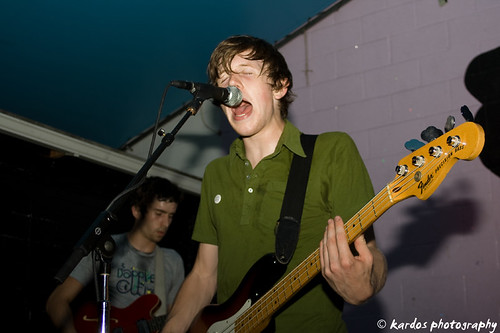 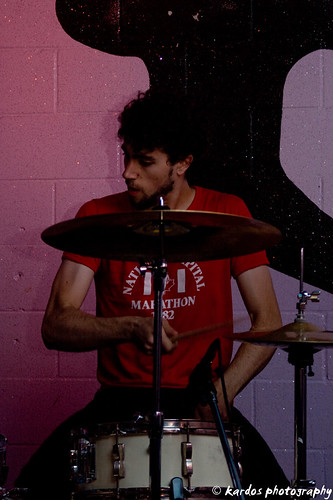 They recently signed to Saddle Creek, and an LP is in the works, or so it would appear from their setlist, which contained about 3 times the number of tracks that they’ve ever released. Upon seeing the setlist at the beginning of their show, I was a little worried that they would be playing way past 11 – but despite the plethora of songs on their list, they wrapped it up by 11:15. Quite impressive. By that time, though, I was hot, sweaty, tired, and completely danced out, so Pete and I headed home, dreading having to wake up the next morning. 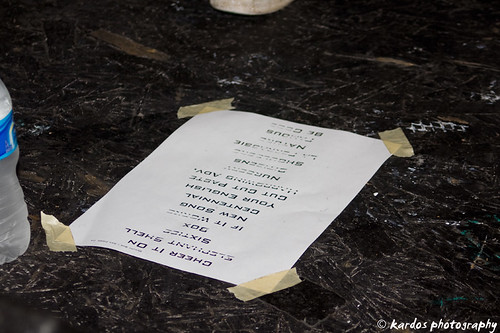