Yes, this was an event that warrants some outdated slang usage. There was an amazing crowd vibe, amazing bands, and some amazing “vs.” costumes (props to “Scissors” for wrapping her legs in duct tape…ouchie). Also, an amazing house.

The basement, where the bands played, had a mostly white ceiling that was extremely low. Maybe not so great for the vertically inclined folks there (I think the ceiling capped out about a foot over my head), but awesome for using the Canon Speedlite flash that I rented for the evening. I could bounce that light all over the place, which made it easy to avoid having to use direct flash and overexpose the shit out of people’s faces. And the beauty of using flash was that I could shoot at ISO 200 as opposed to 1600, which means the photos are a lot less grainy/noisey. Awesome. I’m totally sold on this flash – too bad it costs $280. Ebay, here I come!

The sound was surprisingly good for the space as well. The Muslims were up first, and they got the crowd a’rocking with their brand of garagey rock. I was into them from the first song. And here’s the disadvantage of holding a camera plus shoe-mounted flash during a show – I couldn’t rock out the way I wanted to. Not to mention trying to stay still while actually talking the phtoos. These guys (and girl) made me want to dance my ass off. Loved, loved, loved, their sound. When/where can I get a CD??? 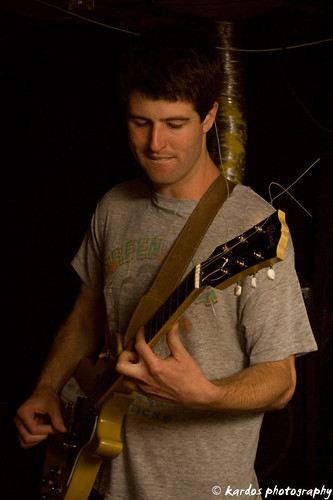 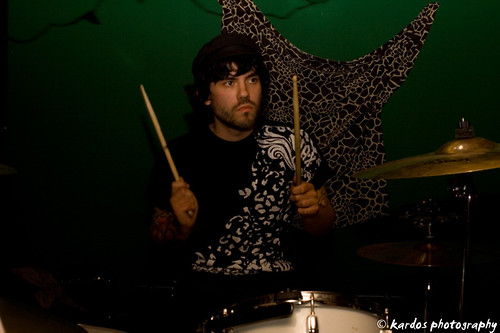 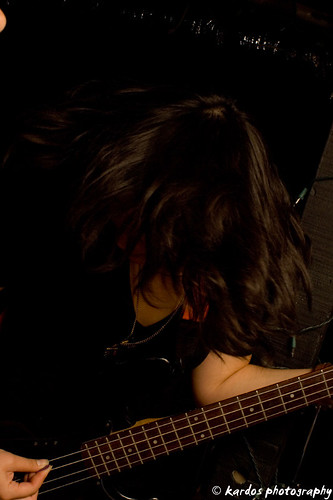 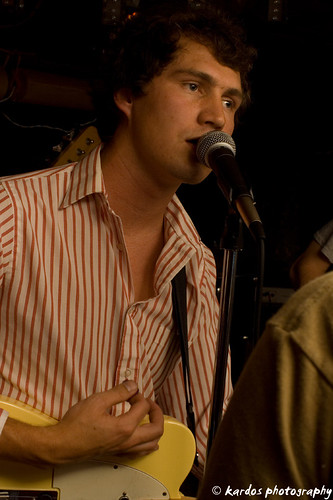 In between band sets, pretty much everyone left the stuffiness of the basement for the backyard (a backyard! In San Diego! Almost as rare as a basement!). I opted to stand in the super long line for the one bathroom in the house (one of the few downsides to the “venue,” but I can deal with that any day), so I missed pretty much all of the DJ set. We got back into the basement just as Grand Ole Party was finishing setting up, and it was pretty packed. I managed to sneak up front on the side of the DJ table, but it seemed as though there was no getting closer. But as fortune would have it, I managed to catch the DJ’s (Ruggy I think he said his name was) eye, pointed at myself, pointed at the empty spot next to him behind the
DJ table, then pointed at my camera. He waved me to come on over. I don’t think I’ve ever had a hand signal conversation that communicated so well.

After I precariously positioned myself behind said table, Grand Ole Party started playing. Again, I was sold on them during the first song. Very funky, very White Stripesy rock, if the White Stripes had a kickass bassist. Somehow managed to leave without getting one of their free demo CDs (where can I get one???), but I cannot wait until their full-length comes out. Fall sometime, they said. I’ll mark my calendar. Everyone in the basement was packed in super close to the front, but it was weird to look back and see half the room empty. Especially considering that the last time I tried to see Grand Ole Party at the Tower Bar, we couldn’t get in the door. But it didn’t really matter, because the entire crowd was with them, pretty much moving back and forth in a wave as they danced. Amazing, I say again. 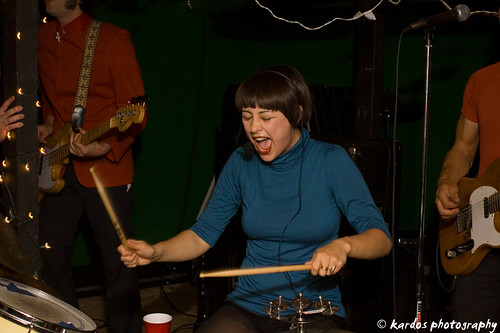 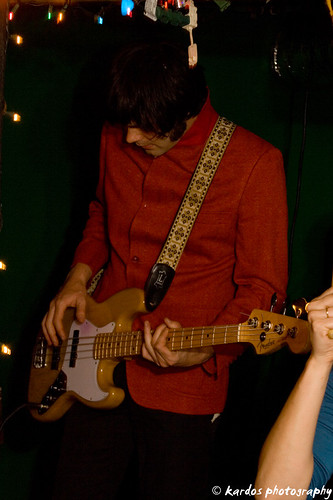 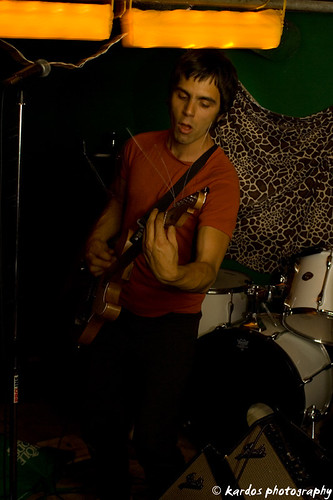 Didn’t stay for the second DJ set, because my feet hurt from the heels I was wearing (stupid shoe choice) and I was pretty damn tired out after expending all that energy seeing The Muslims and Grand Ole Party. Those bands know how to get people moving and shaking, and it was great to see them in that sort of house party environment. It was like all those parties you go to in high school or college, where your friend’s band is playing in the living room or basement. Except this time the bands actually rocked and the cops didn’t show up, but the neighbors did. To party, of course.