Last Thursday, I was still feeling a bit bummed about some things not working out in lab, so I was glad to get out of the house and go see Swim Party at the Beauty Bar. I had seen them once before at the Che Cafe, and I quite liked what I heard then. I dragged Pete along as well, even though he was somewhat skeptical of my two-venues-in-one-night plan. What can I say – I’ve learned from the best.

We showed up at the Beauty Bar around 9:30, just in time to catch up with Petro, the drummer of Swim Party, before they went on. Unfortunately, there weren’t that many people in the bar, perhaps due to the early show time, but apparently both bands that night had to be done playing by 11. Swim Party got going around 9:45, and played a short set of 6 or 7 songs, including a Yo La Tengo cover. 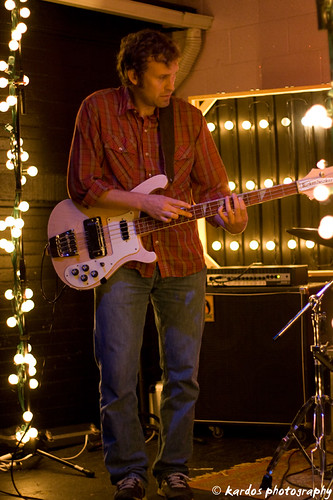 Pete and I both agreed that we were getting a Modest Mouse vibe from the band, which was sort of strange. Looking back on it, I think it had to do mostly with the vocal phrasing, rather than the music or Eric’s voice. I also obtained a copy of their EP that night, and after listening to it a few times, I’ve gotten bits of influences from The Shins and The National as well, the latter mostly coming from the understated but insistent drumming. After seeing them a second time and hearing their record, which includes violin parts in the songs, I really think these guys have a solid sound that’s all their own. Yes, I can quote influences that I’ve picked up, but it’s the combination of those (hopefully, but definitely in this particular case) varied influences that determine whether you’re a derivative band or something, well, something more. 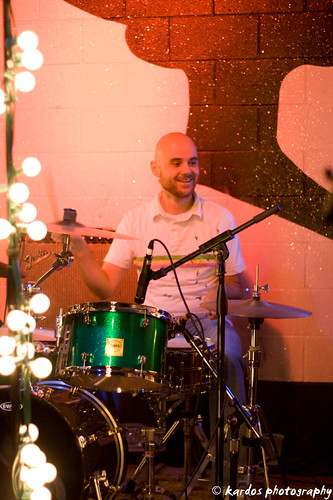 And since I’ve mentioned the EP, I also want to say that the packaging of it is remarkably beautiful. It comes in a recycled cardboard (I think?) sleeve, with a flap that folds over to keep the CD in, as opposed to a normal plastic case. I think the artwork on the outside is amazing – it includes a stitched-on heart in white thread. Inside, the track names are listed in silvery lettering. It’s the small touches like these that ensure that people like me will continue to buy actual albums, even as the digital age soldiers on. Also, the production on the actual album is perfect – way to go, guys. 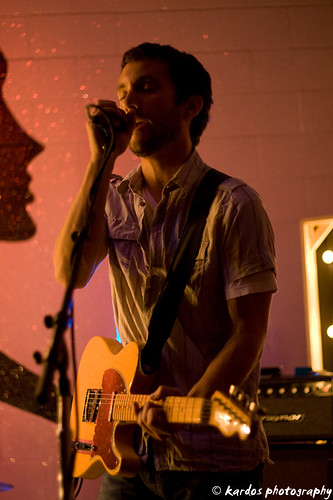 The last thing I want to say is thank you to the band, for bringing their own lights (in the form of light trees and light boxes) to the Beauty Bar. Normally there are all of four lights there, the strongest one being behind the drummer, which usually makes all of the band members backlit and almost impossible to take photos of without resorting to using flash (ewww). But with this lighting setup, I was able to shoot at 800 ISO – aka better quality, less grainy photos – and still capture the cool blue/pink colors that pretty much represent the Beauty Bar. 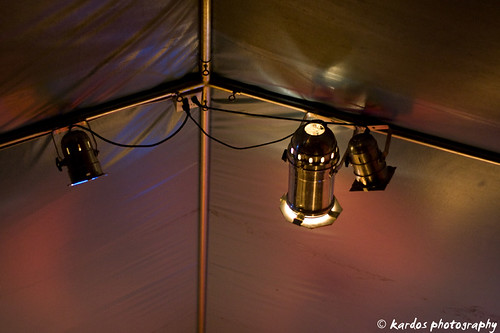