Sometimes I hate the Che Cafe for being on UCSD’s campus. There are a lot of good shows going on there, and I love the colors (and bathroom graffiti) as far as photography goes. But it’s seriously 100 yards from where I work, so the chances of me going there on weekends, or even hanging out for shows on the weekdays, are slim. Plus, going to a show on a weeknight there means I have to drive in to work, because the last shuttle to Hillcrest leaves at 9PM. And I hate driving to work.

But on occasion I do make an effort to see bands there, especially when they have nice people in them or the band is really good. In the case of The Vultures, both of those apply.

I’ve already reviewed them elsewhere on this site, but I’m going to reiterate some things here. The band is really fucking tight and intense. The bassist and guitarist are completely locked in on each other the entire time they are playing, but you barely notice because all your attention is on Chuck, the singer. Because he is an awesome frontman. One moment he’s getting in your face, the next he’s slamming the mic stand into the stage, all the while growling/singing into the mic. It’s amazing to behold, especially if you either know him in “real life” or have seen him play bass in The Prayers. He has a completely different persona in this band, and I like it. 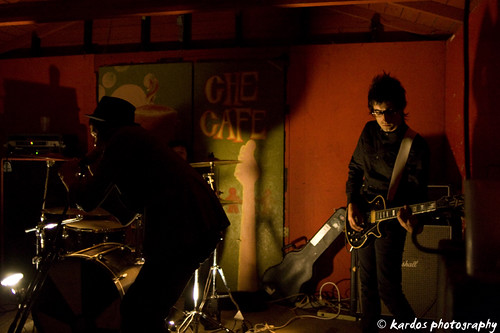 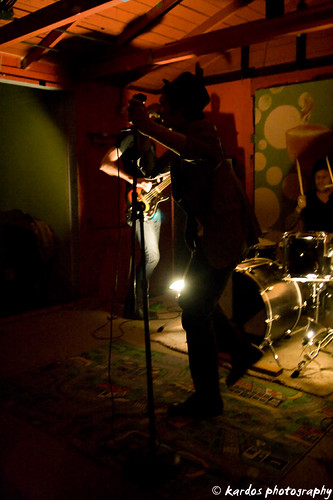 The stage was pretty dark for their set, because they have a new lighting rig on the drumkit. It looks pretty cool, but it renders Chuck almost completely backlit. Which is unfortunate, because he’s really the center of attention. My suggestion? Get two more little spotlights and put them in front of the stage and have them facing Chuck. I know stage lights get really hot, but think of the neat shadows it would throw up on the wall behind the band! 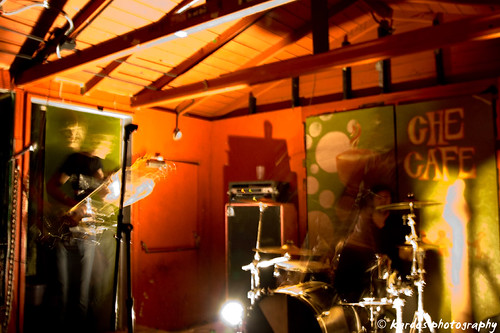 This photo was a 2 second exposure. Chuck is merely a ghostly image in front of the drummer because he moved around so much. It looks like the bassist moved right in the middle of the shot, which is why both images of him appear equally opaque. 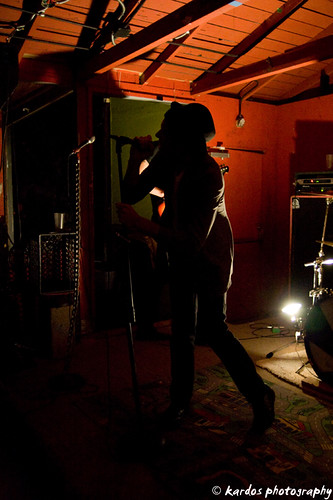 See what I mean about the backlighting?

After the Vultures’ short (20 minutes?) set, I hung out for a bit watching Mr. Tube and the Flying Objects set up and goof around to “The Power of Love” and “Stuck on You.” I guess it’s okay to ironically like Huey Lewis and the News now? Or is it unironic? I can never keep this shit straight…

But then I realized my back hurt from standing, so I headed out. I had a brief notion to drive to the Casbah to catch John Vanderslice, but it was going to be 11 before I got there and tickets were $12. And I am cheap/poor. So instead I went home and watched Hot Fuzz.